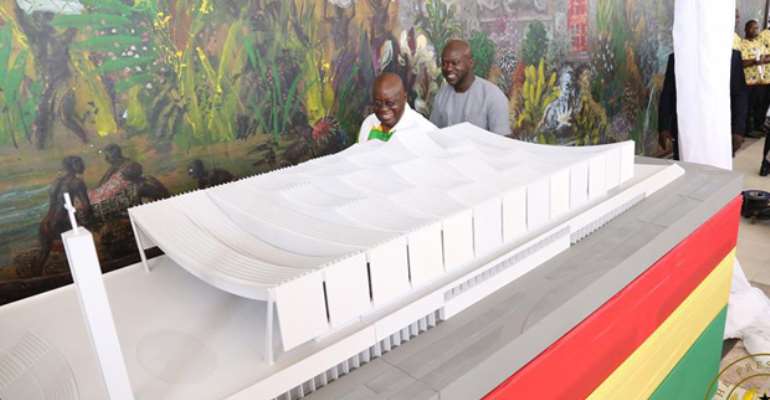 FLASHBACK! President Akufo-Addo at the unveiling of the Cathedral project

President Akufo-Addo has announced the start of the construction of the National Cathedral on the eve of the nation's 63rd independence anniversary after unveiling the iconic design of the project in 2018.

According to him, the interdenominational National Cathedral, which will house a bible museum, a mausoleum and a restaurant, will not just be another national monument adorning the skyline of Accra, but will serve as a national, regional and international pilgrimage and tourism for the nation.

Speaking at a fundraising campaign event in Kumasi on Thursday night, President Akufo-Addo said the cathedral would also be the rally point for the Christian community to come together to worship, pray and promote big national conversations on the role of faith in building the country.

“That is why we are trying to mobilise the Christian community to join us in partnership to raise the needed resources to build the cathedral,” he said.

He indicated that just as God prospered the prophet Nehemiah to rebuild the walls of Jerusalem, he was praying that God would make Ghanaians prosper and make the nation succeed in this endeavour.

The President believed the National Cathedral, when completed, would help unify the Christian community and thereby help promote national unity and social cohesion, since statistics showed that 71 per cent of Ghanaians adhere to the Christian religion grouped under various persuasions of the Christian faith.

“There are some people who still ask some questions why a national cathedral? I will give three reasons: … since gaining our freedom and independence from the British colonial power nearly 63 years ago in 1957, Ghana has been spared civil war, famine and epidemics,” he explained.

According to him, Ghanaians are certainly no better than the other nations who have been confronted with these challenges, saying “but I believe it is by the grace of God that we have been preserved and sustained, and that the construction of the cathedral will be an act of thanksgiving to the Almighty for His blessings, favour, grace and mercy on our nation.”

He added that the construction of the cathedral was also a personal pledge he made to the Almighty if He graciously granted his party, the New Patriotic Party (NPP) and himself the victory in the 2016 election after two unsuccessful attempts.

“I am determined to redeem this pledge. Ladies and gentlemen (referring to the audience), I need your help to do so,” he stated.

He recounted when he announced the project on March 6, 2017, “our 60th independence celebration when I cut the sod for its commencement. In 2018, on our 61st independence anniversary, I unveiled the iconic design by the world-acclaimed Ghanaian architect, Sir David Adjaye, for the cathedral.”

He expressed his deep appreciation to the members of the board of trustees constituted by prominent Christian leaders of the nation who had taken upon themselves the responsibility to shepherd the project into completion.

“Another deep appreciation goes to the members of the fundraising committee led by Archbishop Nicholas Duncan Williams. As you have heard, this is the third time that a fundraising for the cathedral is being held following earlier ones in Accra and Washington DC, USA,” he said.