The Corban Rule and The National Cathedral 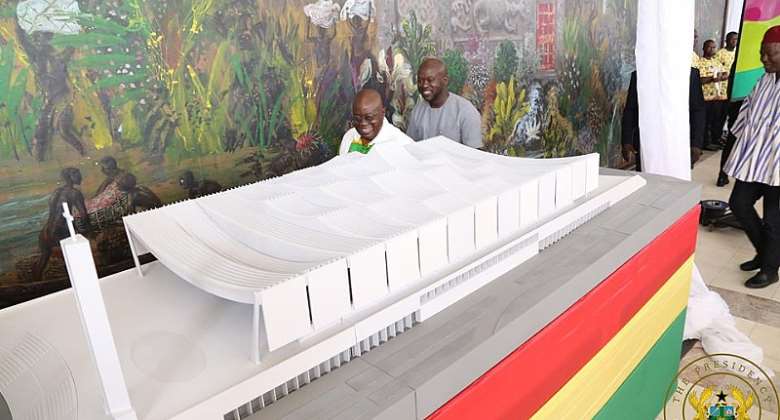 “You have a fine way of rejecting the commandment of God in order to keep your tradition! For Moses said, ‘Honour your father and your mother’; and, ‘Whoever speaks evil of father or mother must surely die.’ But you say that if anyone tells father or mother, ‘Whatever support you might have had from me is Corban’ (that is, an offering to God) - then you no longer permit doing anything for a father or mother, thus making void the word of God through your tradition that you have handed on. And you do many things like this.”

From the above, it can be explained that the Corban is simply what is offered or dedicated to God. The Easton’s Bible Dictionary explains it as “a gift or offering consecrated to God”. Smith’s Bible Dictionary adds that it is “an offering to God of any sort, bloody or bloodless, but particularly in fulfilment of a vow”. The International Standard Bible Encyclopaedia avers that “anything dedicated to the temple by pronouncing the votive word Corban forthwith belonged to the temple…So a son might be justified in not supporting his old parents [or neighbours or forfeit his moral duties towards humanity] simply because he designated his property or a part of it as a gift to the temple, that is, as Corban.”

The high priests saw nothing wrong when humanity was not catered for in the name of corban. There was even no necessity for persons to fulfil their moral duties to the other once they pledge to the temple whether in its construction, renovations or upkeep. In fact, persons might thus exempt themselves from any inconvenient obligation under the plea of corban. It was such practices that our Lord, Jesus Christ, reprehended as annulling the spirit of the law or making void the word of God. Corban in itself is honourable since there is a moral and divine obligation on every believer to offer to God. But the challenge Jesus identified in those days was they honouring their vows or the corban at the expense of other significantly moral obligations.

For instance, “a man says there is no money and hence not able to feed the family. His wife always borrows to feed the children. The man promises his wife he would refund these monies anytime he gets money. Aside, the man is not able to buy books for the children to study. They always rely on outdated resources (books) and his children’s teachers always complain. The man’s workers are always agitated because the man doesn’t pay them well and is even not ready to increase salaries in the nearest future. The man’s house is in disarray. There are cracks everywhere and when it rains it causes destruction mostly in his living room.

Fortunately, the man, through the mercies of God, receives some monies from loved ones, sympathises, old friends and colleagues for purpose of resolving some of his financial challenges. To the dismay of every living creature in the man’s house and environs, the man transfers this money to continue a chapel project in the town square. According to him, he made a personal promise to build this chapel for God if God grants him the Omanhene (Mayor) of the town. It was later uncovered that the man in the midst of these difficulties had been transferring monies to the project. This infuriated the man’s wife, children, parents and other members of the household, friends, sympathises and everyone who sends money to aid the man in his distress. They agreed to report the matter to the well-respected church leaders in charge of the project. To their disappointment, the leaders saw nothing wrong with the man’s action. They encouraged the family to have faith in God and trust that God will deliver them from their difficulties.” Now, be faithful to yourself and tell us, what would you make of this man and the church leaders?

The ideology of this man and the leaders looks similar to the corban incident Jesus Christ spoke against in the New Testament times. Thus, giving to God at the expense of or neglecting humanity’s needs and challenges/difficulties. In difficult situations, where people pray to God for deliverance both spiritual and physical, it is appropriate and morally right to conclude that God would expect this man to take care of his basic household needs first before expending on the church project. This is because God as a father would protect and seek the wellbeing [or the more pressing needs] of his family first before extending to another.

We are experiencing the corban phenomenon currently as Ghanaians with respect to the construction of the National Cathedral. Funds that could resolve important/pressing challenges are being channelled to build a national house for God as if God is in distress and needs a place of abode. The question on most minds is, why is the president fixated on constructing a monumental Cathedral at the expense of most pressing/significant needs as a country? The Holy Scriptures teaches that “righteousness exalts a nation but sin is a reproach…” (Prov. 14:34), so, why didn’t the President promise God something that would not cost him money like ELEVATING THE MORAL STANDARD of the country but a National Cathedral? Someone may say it’s his personal choice. If that is the case, his choice should not be forced on us all and hence our national resources should not be channelled into funding a personal pledge. Another question is, is the Cathedral an afterthought or a recommendation by a religious leader to prevent or annul some anticipated ramifications?

It is obvious that, when someone is obsessed with doing something not existentially important and against all other significant needs then something they are more afraid of is after them. There is this primal understanding in most Ghanaians that when one offends a deity, they could annul the consequences by doing something magnificent for that deity. This understanding is also found in other religions. This principle does not work in Christianity (cf. Micah 6:6-8) because obedience is better than sacrifice (cf. 1 Sam. 15:22-23). Aside that, why is the president fixated on finishing this monumental cathedral in a limited time period? Did the president not count the cost before making such a promise to God if, truly, this was promised before the elections? Or, again, it was an afterthought to salvage foreknown ramifications?

The Trustees of the National Cathedral Project are fine religious leaders who have made/had tremendous impact on the nation and the world at large. Secularly and theologically, these men have aided a lot to have deeper understanding about God and life. They must always be honoured for their respective contributions to Ghana and the world. Notwithstanding that, these men are mere mortals and could easily be influenced by the system just as the high priests were influenced by their traditional system that enforced the corban rule/principle. They could be placed in situations that would make it difficult for them to speak to realities. Their prophetic silence in the face of existential moral and fiscal crises speaks volumes.

The question we wish to ask them is, why are they so much concerned about this Cathedral Project in the midst of a crooked and perverse country? Are already existing sanctuaries (chapels, dorms, cathedrals etc) not enough to preach Ghana’s sinfulness and the redemptive plan of God, especially, to people in political authority? Are they, utmost, sure that God would be happy with such a cathedral in a country that is morally twisted? Just as some speak openly [via selected media of choice] and project the cathedral, they should also speak openly with their prophetic voices [which is their core mandate] about the fallen state of the country, its implications and the need for repentance. It is evident that most policies of this government do not result in expectations. The country keeps sinking daily and the level of hardship keeps soaring. Is it an eschatological phenomenon? If so, why are other nations not finding themselves in similar distress? What we are experiencing as a nation goes beyond the implications of Covid-19 and Russia-Ukraine war and every discerning Ghanaian Christian knows this. The simple question to ask is, why?

Instead of following the corban rule in order to get resources to fund the president’s vow to God, religious leaders must (as a matter of urgency) find out what has gone wrong, especially, at the presidency. Are we facing the wrath of God? Are we being cursed? Has God stopped speaking to his priests? If what Paul Adom-Otchere said is something to go by, that, every secular remedy has been adopted to salvage our current situations but failed, then, we don’t need a National Cathedral at this time but TRUE REPENTANCE and this must start from the presidency. We must repent, put on sackcloth as a people, pray to God and those who have to confess for whatever they have done must do so before things get worse as was done in Nineveh. The evil of Nineveh went before God (cf. Jonah 1:2), has that of Ghana also arisen to God?

Western nations like the United States of America are facing similar negative experiences due to their rejection of God by their leadership. For example, if the killings of innocent babies in the womb [and sometimes even after birth] and LGBTQIAP++ agenda are upheld by the president and his vice, what blessings and protections would they get from God? The US did not experience these phenomena in the previous leader’s era who held on to God and righteousness [though was not perfect].

It is only righteousness that would exalt Ghana and both religious and secular leaders must perform their respective duties to attain this exaltation. Religious leaders must act as prophetic voices to the nation and secular leaders must executive God’s will and purpose for the nation. Religious leaders must be concerned about how morally fallen we have become. Look at the number of radio and television stations in the country and the number of times the word of God is said to be preached daily but with no significant effect on the moral standard of the nation. Are religious leaders not worried? How is this cathedral going to avert the free fall of morality of the country? How is it going to prevent selfishness, corruption, nepotism, tribalism, individualism and all the other immoralities in the country? Cathedrals are good but the corban ideology or principle to facilitate the completion of the National Cathedral in less time and in the midst of pressing/significant needs as a country, is morally wrong and probably divinely not inspired.

Let those who have ears, “…hear what the Spirit says to the churches” (Rev. 2:7a) and the nation’s leaders.

God have mercy on us and protect us from whatever is ahead.