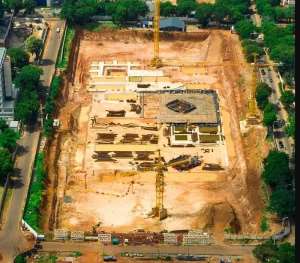 Sebe o Taflatse, Who asked President Akufo Addo in his desperation to be President by any means necessary, to make an egoistic promise to God that he knows he cannot personally fulfil? Is that not lying to God?

To answer the disdainful Ken Ofori Attah directly, YES, it is too much to use taxpayer money by pulling the wool over our eyes and surreptitiously dipping fingers into national coffers. That is called stealing and "thou shall not steal" is a commandment of God.

In a Constitutional democracy and rule of law Regime, you cannot co-mingle state funds with your private Pet-legacy Akufo Addo ego-soothing cathedral as though it were a free-will- or church offering, and call it a National Seed. It is illegitimate and amounts to an unchristian taken of the bread of the children from their poverty existence that the 'guru' Finance Minister can NOT alleviate but is rubbishing in our collective faces.

Thus, The complacent Chief of staff, who cracks no whips, Obaa Panyin Frema Osei Opare acquiescence to orders without strictures and the Finance Minister's serial releases of funds without constitutional oversight is not a cause celebrè due the hypocritical God prefix.

It is an abuse of power and willful "yentie obia" arrogance, thinking you can get away with everything because your ancestors participated in an independence fight, and failed to attain the Presidency, so Ghana owes her soul by its bootstraps in an anything goes harpless and flighty inept misgovernance with a godly 'sakawa' cover-up?

What kind of take by force because 'you can' dictatorial bullying is this? The so-called national seed is symbolic of a classic conflict of interest and causing financial loss to the state if ever there were a good example of a reckless expense by a feckless non-caring government. Was President Akufo Addo elected Cathedral President or President of Sovereign Ghana?

The destroy and Build national Cathedral is neither spiritual nor moral, it is mere posturing subterfuge by lost leadership not providing moral character Building impetus which is the key ingredient in development that transforms nations. God does not extract pernicious promises to further impoverish nations already in debt and amoral crisis. That is anathema to the love nature of God who gives a "future and a hope".

"Adeshie Oman" Ghana, How can a predominantly Christian/ Muslim God-fearing? Sinful nation with all and sundry wearing a title on financial suffering according to our ever- borrowing Veep Dr. Bawumia and sitting on 'sika' while hungry according to "cathedral promo President Akufo Addo", do a hat trick father - Christmas 'Agyapa' indulgence that gives away the "sika" gold royalties, virtually for free, and proceeds to build a cathedral for "Agyenkwa", our heavenly Saviour as an ultimate Tourism Investment hub to make money as a priority of priorities?

Is this ostentatious religious hocus- pocus not blasphemy when our essential character and inner money-grabbing man remains unrepentant and unsaved in a dog-eat-dog character flawed corrupt Ghana? What kind of ill logic is that? The agyapa part is a rather dubious nation-wrecking idiocy whereas the national commercial tourism Cathedral part is an offensive affront with a godly front that lacks transparency and is without any solid righteous foundation.

The cathedral as conceived with illicit backdoor state funds is a flounding project without grounding on a gimmicky stone from Israel as dramatic backdrop while we are traumatized by its onset destructive costly onslaught in spite of the involvement of big Pastors who could use mega tithes to underwrite the project?

It Is a misleader project which feeds on our presumed weakened defences in deference to God's name. It needs to be redeemed by the renewal of our hearts and minds to love thy nebor, each his brother's keeper ethic as an exemplary Priority of priorities policy in governance as a developmental imperative.

We are currently in dark alleys of the national cathedral as operationalised with allegedly $6m paid to a lead consultant and 200mghc already spent at a virtual ground zero, inclusive the revealed unstoppable national seed, an intrigue! which makes it look like a 'con-project' of conceit. How could the nation be told audaciously that it is based solely on private capital when it is not?

Govenance is being reduced to a bewildering unaccountable level. The finance Minister Ken Ofori Attah who has plunged us into serious debt, talking thrash about not using poverty as a reason to not bankroll a Cathedral of deceit has a sickening sense of humour. He does not have the power or authority to ratify illegality in the name of God who does not approve his name being used for this selfish, vain H. E Akufo - Addo prioritized bulldozing Legacy cathedral for the -lying- in state of his eventual mortal remains while the nation is in admitted painful poverty.

The principle is not different from high and mighty jet sets in opulence while pretending to be protecting a national purse which is being dissipated. This Presidential modus operandi does not inspire any godliness, modesty, excellence, honesty, greatness or selfless Service.

How can President Akufo Addo redeem his private vow to God by destroying 17 acres? of myriad national assets including a prime residential enclave for Judges, worth God knows how much? use a whopping $10 million just for the freedom to destroy and gather rubble? For this supposed, $100m turned $300 to $350m Cathedral being tooted as a symbol of piety and expect heavenly applause and no discordant national whiplash? What kind of caustic leadership module is that?

One may quite simply ask? Is land finished in Ghana? Is the earth and all its fullness, not the Lords? Will there not be a day of divine reckoning?

Why are we afraid to object to something that is gross simply because the name of God is attached to it? God have mercy!

Spiritual leadership ought to be by a humble lifestyle, meeting needs and inspiring the right things that please God be done not just a showy edifice of outward religiosity with a bible museum!

As far as investment viability of this national Cathedral as a premium tourism sight, where is the feasibility analysis and business plan and How many light-years will it take to break even not to mention turning a profit and what are the benchmarks?

How does this competitively measure up to awe-inspiring, unique and historic Cathedrals, Grand mosques and great Temples all over the world that cost either nothing or nominal fees or depends on donations for maintenance support? These spiritual sites were not built for profiteering or as tourism sites at inception yet incidental tourist draws are phenomenal due compelling magnificence and or historic significance.

The national contentious Cathedral which conservationists may boycott, cheekily sole-sourced to Adjaye & Associates without national stakeholder process - ownership, local/international competitive bidding for Exciting modernist alternatives is in itself an alienating factor, the design is also not one of Adjaye's best! And certainly, by contemporary standards, there are architectural gems and marvels out there, that make this commercialised museum cathedral pale into a mundane rather than Spectacular edifice.

Certainly, no one is saying that a National Cathedral is per se wrongful or even undesirable. The Akufo Addo government is not making sense by orienting its foundation as an answer to private prayer in destructive and deceptive national arm-twisting rather than moral purity. This makes it ill-advised, ungodly and untimely in view of current severe economic stress.

The Established church is on the rock which is Christ the rejected stone who is now the chief cornerstone, not an Israeli stone. Our christlike worship is to feed the poor, heal the sick, bring comfort and love thy nebor as thyself so that the ultimate principle in governance as Policy emanating from God is service or ministering to others. That is why we have State ministries which instead of serving the people have become seats of corruption stealing from the people with national cathedral seed as an apt case study?

Furthermore, it grieves the Holy Spirit when The house of prayer is turned into a house for making money as depicted by an irate Jesus who chastised with whips and turned tables teaching that God's House of prayer should not be used for commercial enterprises?

As a blemished, imperfect Christian with a sinful nature saved by Grace, I am privy to spiritual enclaves that bring you down to your knees in Repentance and your soul bowed in Thanksgiving and your heart Glorifying an undeserved Goodness of God bestowed. This does not need a building anywhere on site. This is why people gravitate to mountains and beaches and forests including the so-called peripheral declassified Achimota forest, (which could have been a Cathedral site) for the most significant spiritual experiences in solitude and quietude.

When we are truly repentant God and his holy spirit dwell in us and the grand prize is a saved soul and a great commission to reach out to others.

Thus, I should like to look up to leadership that inspires us all to leave wrongful living in the past and aspire to a newness that frees us to participate in genuine nation-building and not be confronted by a national cathedral which says we can live comfortably unrepentant with defective selves and go to a spiritual centre which symbolizes a destructive impulse and not telling the truth in A non-edifying nice edifice without a soul touch. How is this a national priority of priorities when we need to change our ways and be renewed as Temples of the living God?