CDC National Retreat 2020: Matching Towards A New Dawn – The Era Of A Rising Liberian Republic 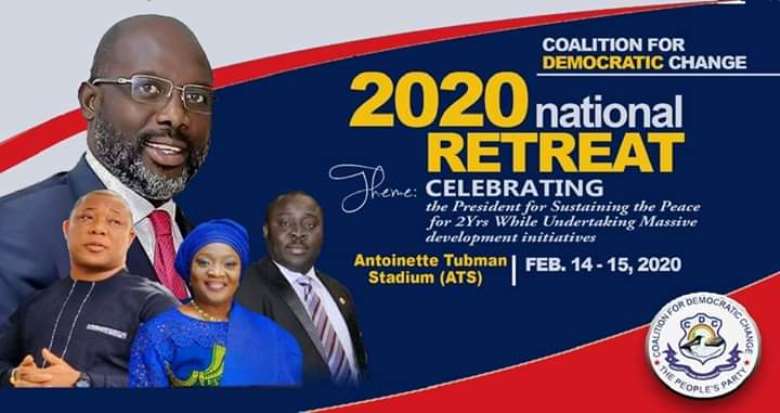 Blessed by the Universal Supreme and abound with natural love and adulation, the Coalition for Democratic Change – CDC will for the first time host its National Retreat at the Antoinette Tubman Stadium on February 15 of this year, since its inception as ruling party in Liberia.

The Coalition for Democratic Change – CDC, a political and traditional party of the vast majority of the Liberian people, has been blessed and sanctified for eons by its dynamic leaders George Weah, Mulbah K Morlu Jr. and Jefferson T. Koijee through words and deeds. We, the CDCians are happily fortunate to be soldiers of this big peaceable heavenly movement.

The CDC National Retreat 2020 is set aside to celebrate President George Weah for the two years of sustainable peace while undertaking massive development initiatives. It will also be a beloved knight-errant that will harness the power of the party, and earn the entire country's true adulation for its huge idea of benevolence for this great Liberian Republic, and like a hopeful ship, it will send a pellucid national message to the whole nation by over hundreds of thousands of committed and diehard partisans who politically, intellectually fight and fight like a ballsy gutsy knight, for the merry delectation of all the CDC nationalistic and patriotic partisans.

Our dauntless selfless warriors will turn out like egalitarians en masse to again show their cemented love and unending support for the people's revolutionary movement.

Unlike other political parties in Liberia, the CDC's interest is to reach out and talk to the people directly through its dynamic and erudite chairman Mulbah K Morlu Jr., Jefferson T. Koijee and other fighting ideologues as well as its Political Leader George Weah. Chairman Morlu together with other party leaders, therefore, travels throughout the seventeen electoral districts in Montserrado County, meeting partisans, talking to them and knowing their problems directly and indirectly from themselves.

The CDC tries to involve all the partisans from all levels of life, in the decision making process, because it feels that the people themselves can understand their problems the best. In fact, the system of decentralisation of leadership has been aimed at such participation of the people in the various districts.

Due to the unprecedented peace and harmony under the dynamic leadership of Chairman Morlu, CDC partisans have developed a great love and respect for the party and leaders, and that to them, their party is like a jewel which can grant any wish.

The glorious reign of the CDC before and after the National Retreat 2020 will create unwavering peace and happiness in the rising Liberian Republic. Under the leadership of Chairman Morlu, the party will achieve many progresses in various areas, strengthen the relationship or bonds between the party and partisans, as it had sent partisans outside of Liberia for advanced training and scholarship, built a historic sycamore stadium, designed a well attractive billboard, established close links with every other Liberian, and started the construction of vocational institution, all leading to the welfare and well being of the partisans of CDC.

The gratitude and appreciation that the partisans have for CDC will be best expressed through the celebrations of some auspicious days coinciding with various important dates in the party's history as it's going to be on February 13, 14 at the party's national headquarters in Congo Town and February 15 at the Antoinette Tubman Stadium in Central Monrovia.

Since January 22, 2018, the party has led the country through rough and smooth times. Henceforth, we pray for everlasting peace, happiness and prosperity of the party, the partisans and the nation as a whole.

On February 15, as the party goes to its first national retreat, it is our hope and aspiration that the blue soldiering revolutionaries soldier on in sound health, eternal happiness and long life for all times to come. May the Almighty God bless us with all His Mighty Might today, tomorrow, always, for eternity.

On the 15th day of February, on that unwonted day we shall wholeheartedly, enthusiastically bow to our party and leaders with our raw and promising commitments to serve the party and nation through speech, body and mind. We shall heartily cooperate for the well-being and happiness of the party and nation.

Storm may thunder and wind may blunder, but our living hearts shall always come for togetherness and fruitfulness without losing hope. We shall spread our wings of hope and fly together towards the horizon where plenty sustainable peace, genuine development, love, happiness, and prosperity lie there waiting for all of us.