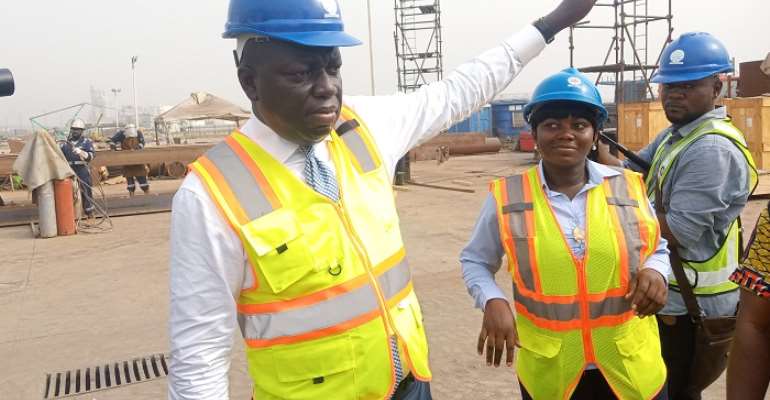 Amoo Bediako at the project site

BELMET 7 — a local oil and gas logistics fabrication company based at the Takoradi Port — has manufactured some components of the FPSO Kwame Nkrumah, which got faulty in 2018 and affected its oil offloading capacity.

The fabricated components, which would help rectify the turret bearing failure of the FPSO, will help to restore it to full capacity.

Tullow, one of the Jubilee partners, commissioned a 23-month project to fix the problem and awarded the contract to Subsea 7, an international company at the Port of Takoradi.

In December 2018, Subsea 7 in turn subcontracted the fabrication of some of the project's key components to Belmet 7.

The contract involved the fabrication of seven suction piles, topside FPSO module, pigging skid and a hang off platform. The project comprised the design, fabrication, installation and integration of an oil offloading system (OOSys).

Speaking to journalists, Peter Amoo Bediako, Marketing and Public Affairs Manager of Takoradi Port, noted that the hang off platform was loaded onto a barge at the Belmet 7 quayside in the port last week for transfer to the offshore project site of the FPSO.

He described the successful completion of the fabrication of the project components by Belmet 7 as significant milestone for local oil and gas service providing companies.

“The pigging skid component of the project, which regulates the flow and cleaning of the pipelines of the vessel, is the first ever topside FPSO module that has been wholly manufactured in the country. This will open the door for more FPSO modules to be fabricated locally in Ghana,” he said.

Theophilus Ofori, Site Manager of Subsea 7, said the initiative was a boost in the local content participation requirements of the Petroleum Commission, with the attendant revenue flow to local content providers.

He mentioned that the project had provided an avenue for skills transfer and capacity building in a very strategic area of the oil and gas sector.

He added that about 80 local workers and supervisors were engaged for the project.

I've never seen a male goat or cow running after another mal...
34 minutes ago