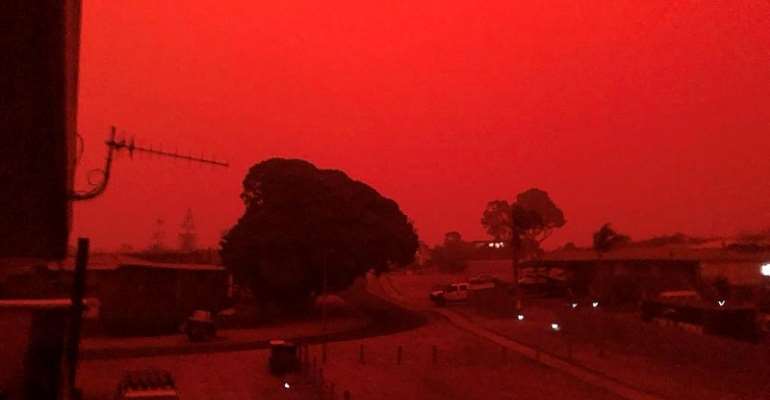 As firefighters in southeast Australia continue to battle hundreds of unrelenting bushfires, the death has risen to 25. Despite much-needed logistic aid announced at the weekend in the form of army reservists, volunteers are digging their heels in for the long haul with the knowledge that this scenario is likely to become the new norm.

Firefighters took advantage of a brief drop in temperatures and some much-needed rainfall on Tuesday before the arrival of the next heatwave, forecast for later this week.

Exhausted volunteers cleared ground vegetation and carried out controlled burns before temperatures and winds were expected to pick up again by Friday.

"It really is about shoring up protection to limit the damage potential and the outbreak of the fires over the coming days," said New South Wales Rural Fire Service commissioner Shane Fitzsimmons.

This is in addition to help coming from teams from the US, Canada and New Zealand.

Even France has offered immediate operational assistance if necessary.

But on the ground, many citizens are wondering how the situation could have got so out of hand, when the warning signs were looming back in September, when the first fires broke out.

Morrison, whose government has been criticised for its slow response to the emergency, on Saturday pledged AU$2 billion ($1.4 billion) of taxpayer money for a national recovery fund.

"It's a long road ahead and we will be with these communities every step of the way as they rebuild," he told local media.

Thousands of properties have been destroyed and the total amount of land burnt is close to eight million hectares to date.

"We should just be honest about the fact that we're going to see more and more fires, more and more damage as each fire season comes... This is the new normal," Andrews told reporters.

Stephen McDonald has been a volunteer firefighter in the south-east metropolitan area of Melbourne, Victoria for the last ten years. He is also a senior volunteer with the NGO Save the Children, an organisation working with the Red Cross and other groups to bring relief to families on the ground.

Never seen on this scale before
"I've seen some very big campaign fires and obviously smaller local fires, but the kind of fire behaviour that we're seeing is really quite a marked difference from what we were seeing in the 1990s, early 2000s.The speed, the rate of spread, is taking place in a way that is really quite unusual," he tells RFI.

"Some of these fires have been running for months," he says, referring to some of the fires raging in the state of NSW and Victoria.

"I think that the issue we have here is that the scale and scope of these fires have caught everyone by surprise...and things are going to be spreading and getting worse and some of these fires are starting to join up."

When asked whether the government's decision to call up reserve troops to help was too little too late, he responds by focusing on the bigger picture, and that more strategic thinking around fire handling will be needed for the future.

"It's so unprecedented that I think the assistance is welcomed, but what we need to do is to be starting to think now around the medium-term planning on this," he says.

Gruelling months ahead
He explains that average temperatures throughout 2019 were 1.5 degrees Celsius warmer than average and the prolonged drought has seen grasslands and forest fuel much drier than usual.

"I think the real challenge is that these fires are at a stage now where it's very difficult to attack them head on."

"In many respects it's going to be around defending townships and villages across the country to try and minimise the number of homes and businesses that are lost."

"But we've got another three to four months of this season to get through and as I said earlier, the hottest part of the summer is yet to come," he concludes.

Smoke reaching South America
Meanwhile, weather authorities in South America reported that smoke from the fires has been spotted more than 12,000 kilometres (7,400 miles) away in Chile and Argentina.

The captial Canberra has been described as the world's most polluted city – temporarily – bathed in a dense haze.

Rallies are planned on Friday to call on the Australian government to step up efforts to tackle climate change, which experts say have helped fuel the fires.