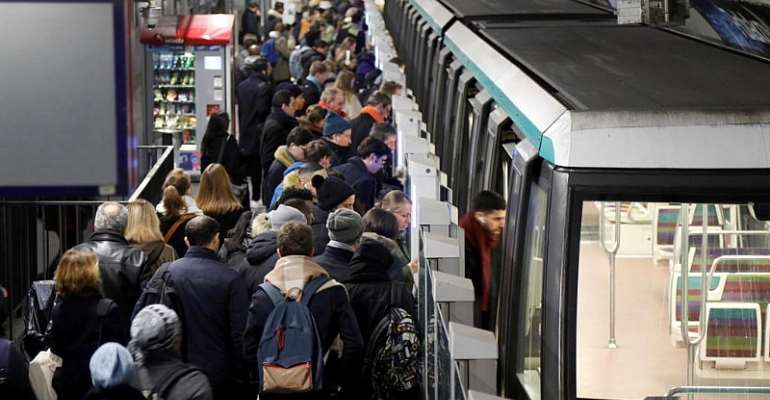 French commuters returning to work after the holiday period were faced with continuing travel disruptions on Monday at the start of a week of renewed negotiations and mass protests over President Emmanuel Macron's plans to overhaul the pension system.

In Paris, commuters still faced travel disruptions, though more metro lines were operating than when the strikes began a month ago.

The RATP, the company operating the Paris Metro, reported traffic on Monday remained “very disrupted”, although it was also “slightly improved” compared with Friday, with full service on just two of the sixteen lines but no lines shut down completely.

Most Metro services, as well as service on the RER suburban trains, were reduced and limited to rush hour and to just sections of the usual routes. The eight tram lines offered either full or nearly full services, while three quarters of buses were expected to be running.

Traffic showed clearer signs of improvement on the SNCF national railroad, with 80 percent of high-speed TGV trains, two thirds of regional trains, half of Paris-region lines and a third of intercity lines operating.

Government urges compromise
President Macron convened the French government's first cabinet meeting of the decade looking ahead of a week expected to see both renewed negotiations and mass protest marches.

During the meeting, Macron reiterated his wish "for the government and the social partners who support a universal points-based pension system to find a quick compromise”, according to government spokesperson Sibeth Ndiaye, referring to the president's remarks during a traditional year-end address.

Talks between government and unions were set to resume Tuesday and continue until 22 January, when the reform will be presented to cabinet ministers before entering debate in parliament.

One avenue for negotiations is a proposed pivot age of 64, after which retirement benefits would increase. The moderate CFDT union, the country's largest by membership, has so far rejected the proposal, though it is favourable to other aspects of the reform.

With some trade unions calling for walkouts, blockades of oil refineries and mass nationwide protests on Thursday and Saturday, the government sought to emphasise differences between moderate and hardline unions.

“Quality dialogue means each party coming with its own vision and making compromises,” Ndiaye said.

“Some unions refuse a universal points-based system in principle. I assure you it's harder to dialogue with them, but we believe that dialogue must happen and must continue.”

Strikes affecting travel, education, health care and other sectors of the public service began on 5 December. Some self-employed workers in the private sector, including doctors, nurses, airline staff and pilots, joined the strike on Friday.