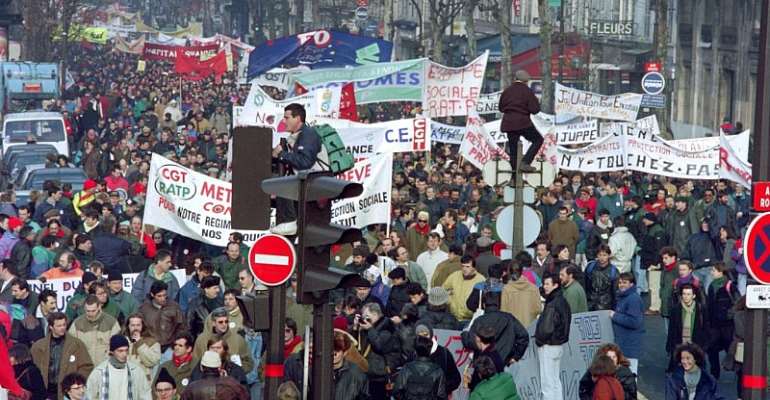 Nationwide strikes in France against pension reform have entered their 23rd day, making them the longest in three decades. The previous record in 1995 saw rolling strikes force the government to bury similar reform efforts – but Prime Minister Edouard Philippe remains adamant that this cabinet will not give in.

Commuters faced fresh misery on Friday as railway workers once again stayed off the job in protest at government plans to merge 42 pension schemes into a single, points-based system.

Train and metro transport was again severely disrupted in Paris and on regional lines, with just over half of high-speed TGV trains running according to state rail company SNCF.

Suburban trains in the larger Paris region were also affected, with four out of 10 regional trains and a quarter of inter-city connections running.

Meanwhile in the capital, only two of 16 metro lines – both automated - were running as usual, four were closed, and ten provided a much reduced service.

The government says the pension overhaul is needed to create a fairer system.

But the proposals have brought hundreds of thousands out on the streets including train drivers, pilots, lawyers, doctors and police.

Holding on for repeat of 1995
Protesters say scrapping special regimes for sectors like the railway and making people work to 64 to draw a full pension is unfair.

The labour action, which started on 5 December, is now longer than the notorious 22-day strike of the winter of 1995 under late president Jacques Chirac, which forced the government to back down.

Hardline unions, who have vowed to press on with the strikes no matter what, are hoping for another U-turn this time round.

"It's a strong movement and still backed by public opinion," said Philippe Martinez, secretary general of the CGT union as he visited picketing workers at a bus depot Friday.

He lashed out at Prime Minister Edouard Philippe for failing to engage in meaningful social dialogue.

For now, President Emmanuel Macron and his government are standing firm.

However, cracks in the government resolve may be starting to show, after authorities on Thursday were forced to give in to demands by air hostesses and stewards to keep part of their complementary pension intact even under the new universal points system.

Thursday also saw several hundred people turn out in Paris for a rally in support of the striking rail workers.

Talks between unions and government last week failed to find common ground and a new day of mass protest has been called for 9 January – two days after negotiations are set to resume.

Before then, businesses – which have been left reeling from the labour action – will have to contend with further disruption on 28 December as more protests are planned.

It’s beyond debate; Akufo-Addo has completely mismanaged Gha...
46 minutes ago

My morale is down – Angry Inspector reacts to mass promotion...
50 minutes ago