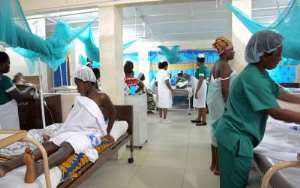 The Health Services Workers' Union has called off their planned strike over their conditions of service in the country.

The group declared a nationwide industrial action which was to begin on December 27, 2019 to compel the government to address their concerns of salary distortions among others.

However, after a meeting with the National Labour Commission and government, the health service workers' union has resolved to continue to dialogue with stakeholders' on the issue.

A statement signed by its General Secretary, Reynolds Tenkorang urged the over 28,000 Health workers across the country to remain calm and return to work.

The Health Services Workers' Union had earlier given the government a two-week ultimatum to address their concerns.

Some other concerns of the Union are the selective implementation of the collective agreement, payment of market premium based on their current monthly basic salary, salary distortion under the Single Spine Salary Structure, non-implementation of National Health Laboratory Policies, no increment in credits, upgrade of three-level grades to four.

The workers consist of mortuary attendants, cleaners, ambulance services, laboratory staff among others.