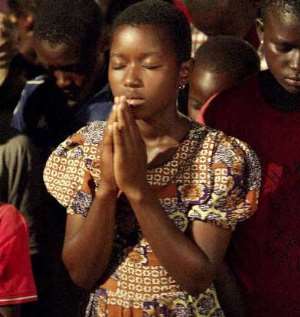 CHICAGO (Reuters) - A study of more than 1,800 patients who underwent heart bypass surgery has failed to show that prayers specially organized for their recovery had any impact, researchers said on Thursday.

In fact, the study found some of the patients who knew they were being prayed for did worse than others who were only told they might be prayed for -- though those who did the study said they could not explain why.

The praying was done by members of three Christian groups in monasteries and elsewhere -- two Catholic and one Protestant -- who were given written prayers and the first name and initial of the last name of the prayer subjects. The prayers started on the eve of or day of surgery and lasted for two weeks.

After 30 days, however, the death rates and incidence of major complications was about the same across all three groups, said the study published in the American Heart Journal.

There is "no clear explanation" for the latter finding, it added.

The study -- called the largest of its kind -- was designed only to try to measure the impact of intercessory prayer on heart surgery patients, an intervention that some earlier reports had showed seemed to be beneficial.

"Our study was never intended to address the existence of God or the presence or absence of intelligent design in the universe" or to compare the efficacy of one prayer form over another, said the Rev. Dean Marek, director of chaplain services at the Mayo Clinic, one of the authors.

The patients in the study had similar religious profiles with most believing in spiritual healing and almost all also thinking that friends or relatives would be praying for them as well, he said.

"One caveat is that with so many individuals receiving prayer from friends and family, as well as personal prayer, it may be impossible to disentangle the effects of study prayer from background prayer," Manoj Jain of Baptist Memorial Hospital, Memphis, Tennessee, another author of the report.

The authors said one possible limitation to their study was that those doing the special praying had no connection or acquaintance with the subjects of their prayer, which would not usually be the norm.

"Private or family prayer is widely believed to influence recovery from illness, and the results of this study do not challenge this belief," the report concluded.

'Captain Smart arrest is intolerance, he did no wrong' – Med...
20 minutes ago