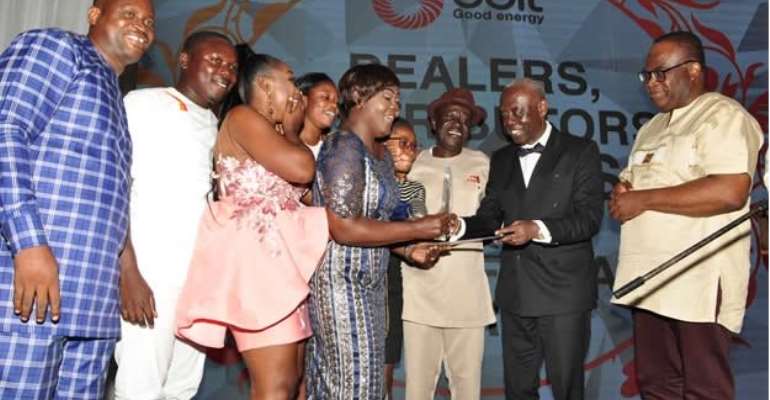 GOIL Sebrepor station near Tema in the Greater Accra Region was adjudged the overall National Best Dealer and the Best Lubricant Dealer in the Southern sector. The station also won the Best Go Café in the Tema Zone, whilst its Best Lube Bay attendant George Kofi Yevuyibor, was recognized in the Zone.

For her prize, the Dealer of the station, Georgina Gyabeng, will benefit from a five-day sponsored trip abroad with paid hotel accommodation and $2,500 spending money. She also received a plaque and a certificate of recognition and a citation.

Each of these Zonal best dealers received a 5-day sponsored trip abroad with paid hotel accommodation and $1,000 spending money as their prizes

The Board Chairman of GOIL, Mr Kwamena Bartels, charged GOIL staff to continue to carry the banner of the company by working harder to entrench the company’s leadership position.

In a goodwill message, the CEO of the Association of Oil Marketing Companies (AOMC) Mr Kwaku Agyeman-Duah, lauded the company for its local content initiatives and involvement in both the downstream and upstream business.

He also praised the contribution of GOIL, noting its excellent services in the provision of quality products and services in all the critical sectors such as Aviation, Bunkering, LPG, Lubricants and other fuels.