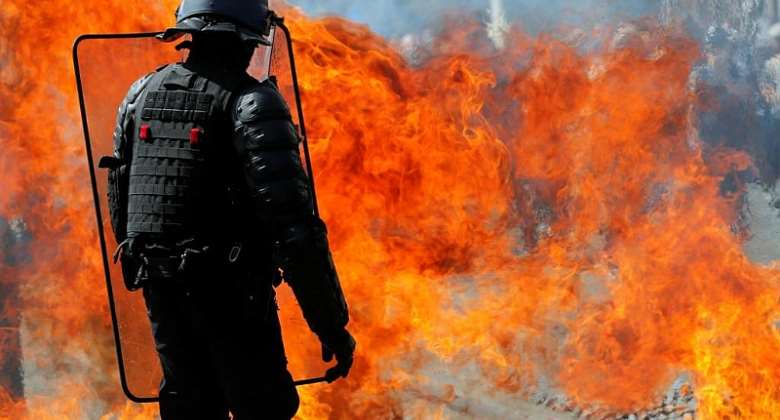 The French police officer found guilty of committing an act of deliberate violence by throwing a paving stone during a 1 May Paris demonstration has been sentenced to a suspended two month jail term.

The 44-year-old member of the CRS, the special security division of the French police service, was found guilty on charges of using "deliberate violence while being responsible for maintaining public order".

The prosecution had asked for a three month suspended sentence.

The officer, who has not been named, was filmed hurling a paving stone in the direction of protestors during violent exchanges between the police and demonstrators in Paris on 1 May.

Video footage seen during the trial shows that the officer and the nearest protestors were about 8 metres apart at the time of the incident. It is unclear where the projectile lands, but there were no complaints of injuries from any demonstrator.

Announcing the sentence, the judge said that the policeman's reaction could not be deemed legitimate defence, but was rather an expression of "exasperation, panic or revenge".

The judge did recognise that the circumstances under which the forces of order fulfilled their duties on the day in question had been "extremely trying".

The officer has not been suspended from duty, and the incident will not be noted in his judicial record.

A second police officer is awaiting trial on charges of striking a Yellow Vest protestor in a separate incident in Paris, also on 1 May.

There have been repeated complaints about excessive police violence in the handling of Yellow Vest demonstrations, especially concerning the use of flash-ball launchers.

The internal investigation unit of the French police has received 212 complaints since the protests began last year, with 18 cases being passed on to the judicial authorities.