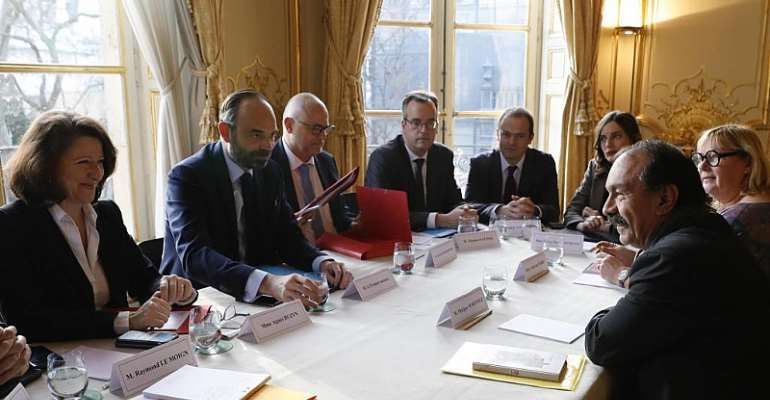 French officials met with union leaders Wednesday hoping to end a deadlock over a disputed pensions overhaul that has led to crippling transport strikes. Despite an offer from President Emmanuel Macron to "improve" the plan, France's main trade union says a deal is still "a long way off."

The meeting came after a marathon round of talks between the French PM, unions as well as employer organizations on potential amendments to the reform package.

One of its most controversial aspects is a so-called pivot age, which would require workers to work until 64 to claim a full pension.

They could still retire at the current legal age of 62 but would face a reduced pension.

The prime minister "repeated again that he wanted to keep this pivot age. We told him that this is not an option," Berger told BFM TV, describing the pivot age as a red line.

No let up
Berger though acknowledged a "willingness" on the part of the government to negotiate on other issues, such as the arduous nature of certain jobs, but remains skeptical about a compromise deal being reached by Thursday.

The government is relying on the support of more moderate unions like the CFDT to end two weeks of mass transportation strikes in France that have cast a shadow over Christmas holiday plans.

The CFDT, which sat out demonstrations earlier this year, this week demonstrated alongside other unions against the pensions overhaul, dousing hopes of an early end to the protest movement.

Hardline unions like the CGT have vowed there would be no let-up unless the reform plan was withdrawn.

"We're here to sound the alert about the situation in the country, its discontent," CGT head Philippe Martinez said after his meeting Wednesday with the prime minister. His warning fell on deaf ears.

Worlds apart
“We have two clashing perspectives,” Martinez said afterwards. “We don't have the same values.”

President Emmanuel Macron has vowed to push ahead with the reform, which would merge the country's 42 pension schemes into a single, points-based system.

But he has said he is "willing to improve it."

"Obviously we are ready to work on a compromise," government spokeswoman Sibeth Ndiaye said Wednesday, a day after 615,000 people took to the streets across France for the third mass demonstrations since the pensions strike began on 5 December.

According to the latest opinion polls, 57 percent of people oppose the reform, an increase of eight points from last week.

After meeting with union leaders separately, Prime Minister Edouard Philippe will now meet with them all together on Thursday in a new bid to break the pensions deadlock.