“President Has Articulated New Vision of ‘Ghana Beyond Aid’” 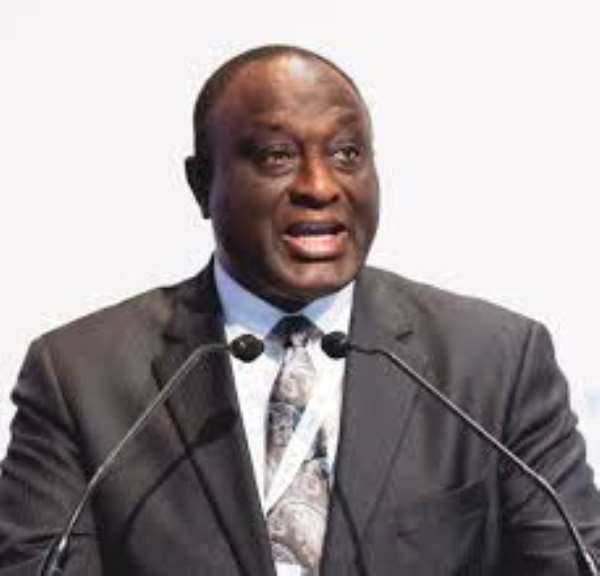 In an effort at regarding Ghana as a self-reliant nation, Minister for Trade and Industry, Alan Kwadwo Kyerematen has revealed that President Akufo-Addo has articulated the vision of a new “Ghana Beyond Aid”, designed at making the country self-sustaining anchored on inclusive growth and shared prosperity.

According to him, Ghanaians will realize this vision through Industrial Transformation particularly if it works towards creating an integrated market for Africa and for all Africans.

Speaking on the theme,“Industrialising Ghana Beyond Aid for an Integrated Africa” the Trade and Industry Minister said “Our focus will be on Industrialisation and how it feeds into the Ghana Beyond Aid Agenda, and which will propel us to take advantage of the Continental Free Trade arrangement”

He also added that it is an incontestable fact that no country has developed without industrialization.

Hon. Kyerematen further added that it is therefore not by accident that the ten largest economies i.e United States, China, Japan, Germany and United Kingdom among others in the world are the most industrialized economies.

The Trade and Industry Minister said “In 1959, 104 out of 234 firms which operated in the immediate independent era were established before 1950, in the then Gold Coast (Ewusi,1981). Most of these firms were in the wood and cork industries, located mainly in the forest zones; Ashanti and Western Regions of the country”

He further disclosed that the objective of the Act was to formulate policies and drive the industrial development of the then Gold Coast adding that the IDC operated largely as a loan agency focusing on privately conceived projects.

Speaking on the State-led Import Substitution Industrialisation between 1960 and 1983, Hon Kyerematen disclosed that the declaration of the First Republic in 1960 ushered in a new model of industrialisation backed by Socialist ideals and principles.

The Trade and Industry Minister revealed that Late Nkrumah’s approach to Industrialization was therefore purely state led adding that it required intensive design of industrial programmes and massive investments into industries by the Central Government.

He, however, mentioned that under the approach, the government established the Volta Aluminium Company (VALCO) smelter, sawmills and timber processing, Cocoa processing, Breweries, Textiles and Garment, Cement, Meat processing and Tomato processing (Killick, 1978).

Hon Kyerematen stressed that the Convention People’s Party (CPP) Government led by Nkrumah used the state-led Industrialization approach as a means for economic empowerment of the new Ghanaian through job and wealth creation.

“The approach generated significant positive results for economic development of the country. For example, the manufacturing output increased by about 13% in the 1960s whiles total employment in the sector grew by over 90% within the same period” he stated.

Speaking on the Industrialisation under the Economic Recovery Programme (ERP) – Between 1984 to 2000, Hon. Kyerematen disclosed that the inception of the Economic Recovery Programme (ERP) by the Bretton Woods institutions in 1983 improved the supply of foreign exchange, abolished the import licensing regime, removed price controls, and created the opportunity for imported machinery among others.

He said the approach to industrial development sought to create an enabling environment for the development of small-scale manufacturing and value addition.

He emphasized that the macro-economic stability between the early 80s and early 90s led to increased capacity utilization, rising steadily to about 40 percent in 1989.

He noted that the combined effect of import competition and financial sector reforms under the Structural Adjustment Programme (SAP) significantly affected the industrial sector performance during the period.

He further explained that the industrial sector growth rate between 1985 and 1994, fell from 17.6% to a paltry of 3.1% adding that the Ghanaian private sector failed to withstand the pressure of global competition, and inherent local structural constraints such as unreliable power supply.

The Trade and Industry Minister mentioned that despite these attempts by the Jerry Rawlings Government and Development Partners to deal with the industrial productivity bottlenecks, the industrial sector experienced marginal growth between 1995 and 2000, with an average growth rate of 4.3%.

“These programmes and projects to a large extent could not achieve the desired results due to implementation inefficiencies. In addition to the above, the market liberalisation had exposed the local manufacturing firms to keen competition from both matured and emerging markets such as Europe, the USA and India” he noted.

He lauded the Kufuor Administration between 2000 and 2008 for focusing on a private sector-led model of industrial development through the application of science and technology under the Growth and Poverty Reduction Strategies, GPRS I (2003 – 2005) and GPRS II (2006 – 2009).

He stressed that attempts under the administration were geared towards the promotion of value addition in the agro-processing sector for export and domestic consumption.

He added that other measures focused on improving agricultural productivity, market access, and promoting Industrial Sub-contracting and Partnership Exchange (SPX). These strategic interventions stimulated growth of the industrial sector starting from the year 2002 with a growth rate of 4.7%, from 2.9% in 2001, and further to 5.1% in 2003 and 2004.

Speaking on Industry Value-Added (Annual % growth – 2009 to 2016), Hon Kyerematen stated that it is not surprising that the manufacturing sub-sector declined in growth whiles the overall industrial sector experienced sharp decline at 1.1% in both 2014 and 2015 fiscal years.

Touching on the Akufo-Addo led Industrial Transformation Agenda, he mentioned that the NPP’s plan for Jobs called for a structured and strategic response to the challenges facing Ghanaian industries.

“In the NPP manifesto for Election 2016, a number of strategic interventions were designed to address these challenges. The interventions include the One District One Factory (1D1F) Initiative, the National Industrial Revitalisation Programme (NIRP), the establishment of Industrial Parks and Special Economic Zones (IPSEZ), Export Development and SME Development” he revealed.

He also noted that the programmes/initiatives were designed to address the challenge of lack of capacity utilisation in the industrial sector, dealing with severe poverty and under development in rural communities through the establishment of an institutional framework that will attract private sector investments into the rural economy.

Speaking on One District One Factory (1D1F) Initiative, he said “Since the inception of the programme in 2017, Business Promoters in 112 out of the 260 Districts have received support from the Government and Participation Financial Institutions (PFIs)”

He added that a total of 181 projects spread across the 112 Districts are currently at various stages of implementation under the 1D1F initiative.

He further explained that it includes 58 companies and projects already in operation and 26 projects under construction. It is envisaged that the 1D1F initiative will generate a total of about 200,000jobs.

The Trade and Industry Minister mentioned that the construction of 58 1D1F Small-scale processing factories financed by the African Development Bank (AfDB) in all the Sixteen (16) regions across the country will commence before the end of the year.

He stated that these Processing Facilities are to be owned and managed by Graduate Youth who have been organized into groups under an innovative corporate structure known as the 1D1F ENABLE Youth programme.

The Minister revealed that the Ministry has completed the screening of all 16,770 applications from Graduate Youth who expressed interest in the programme adding that this component of the 1D1F initiative will create new young dynamic entrepreneurs across the country.

Speaking on the National Industrial Revitalization Programme (Stimulus Package), he mentioned that the Ministry is providing targeted support to ten (10) large scale companies operating in the Poultry, Rice, Garments and Textiles, Agro-processing and Pharmaceuticals sectors across the country.

He said this is expected to boost the import substitution and export development programmes of the country.

On Industrial Parks and Special Economic Zones (IP & SEZ)- “One Region One Park”, Hon Kyerematen revealed that the Private Sector promoters are currently being supported to develop Industrial Parks and Special Economic Zones around the country, to provide dedicated land space with energy, water and telecommunications facilities for the establishment of manufacturing industries.

“Specific projects currently being supported under the IP & SEZ initiative include the Dawa Industrial Zone (a 2000-acre industrial park with a 330 KVA power facility located in Dawa in the Greater Accra region); West Park (a 440-acre Industrial Park located in Shama in the Western region promoted by the BlackIvy Group of the United States); Appolonia Business Park (a 200-acre mixed used Industrial Park and Residential Enclave promoted by the Appolonia Development Company)” he disclosed.

He explained that it was attended by 300 participants from the business community including representatives of business associations.

Highlighting the African Continental Free Trade Area (AfCFTA), the Minister stated that the creation of a single continental market for Africa had long been the dream of the founding fathers of most of the major countries in our continent.

He said “The Abuja Declaration of 1991 of the Authority of Heads of States of the Organization of African Unity (OAU), envisioned the establishment of an African Economic Community. One of the building blocks for the establishment of this Community was the creation of a Continental Free Trade Area for Africa”

He also noted that the realization of the vision of a single market did not materialize until the AU Summit of Heads of States and Government in January 2012, which formally endorsed the decision to establish an African Continental Free Trade Area.

“Since that decision was adopted, extensive preparations and negotiations were carried out by Member States, finally culminating in the historic AU Summit decision in Kigali on March 21st 2018, to formally conclude the first phase of negotiations for the Continental Free Trade Agreement. “

He emphasized that it is worth noting that currently all African Trade Ministers and Senior Trade Officials from the 55 Countries are meeting in Accra, to deliberate on the operationalisation of the Single Continental Market.

He explained that 54 out of 55 countries in Africa have so far signed the AfCFTA, with 28 countries having ratified the Agreement and deposited their Certificates of Instrument.

“The new Single Market will be a Duty-free Quota-free trading bloc covering the entire African Continent with a total population of 1.2 billion and a combined Gross Domestic Product (GDP) of almost USD 3 trillion” he mentioned.

The Minister noted that the AfCFTA is the most significant development in Africa since the establishment of the Organization of African Unity (OAU) in 1963 adding that it is the world’s largest Free Trade Area, second only to the World Trade Organisation (WTO) in terms of the number of Member States.

Touching on the Ghana Beyond Aid in an Integrated Africa, the Minister revealed that the African integration is paramount to the survival of many African States in a keenly competitive global economic environment.

He stated African countries in general stand to benefit from an integrated Africa adding that a robust industrial sector will lay the foundation for economic growth and development.

“This cannot be achieved if we continue the current development path characterised by over reliance on aid and donor support.The Ghana Beyond Aid Charter defines the Ghana Beyond as a prosperous and self-confident Ghana that is in-charge of her economic destiny; transformed Ghana that is prosperous enough to be beyond needing aid, and that engages competitively with the rest of the world through trade and investment.”

He also clarified that there could be no better development framework than the Ghana Beyond Aid Charter. It is through Industrial Transformation that the objectives outlined in the Charter can become a reality.

“It is through Industrialization that Ghana can focus on her key development drivers to achieve a Wealthy, Inclusive, Sustainable, Empowered and Resilient Ghana (WISER Ghana). The future is bright for Ghana. As citizens of our dear country, we need to work together individually and collectively to propel our nation to achieve our vision of a Ghana Beyond Aid and usher in a period of wealth creation and prosperity for all” he said.

Assessment of ministerial nominees not on partisan basis – H...
33 minutes ago