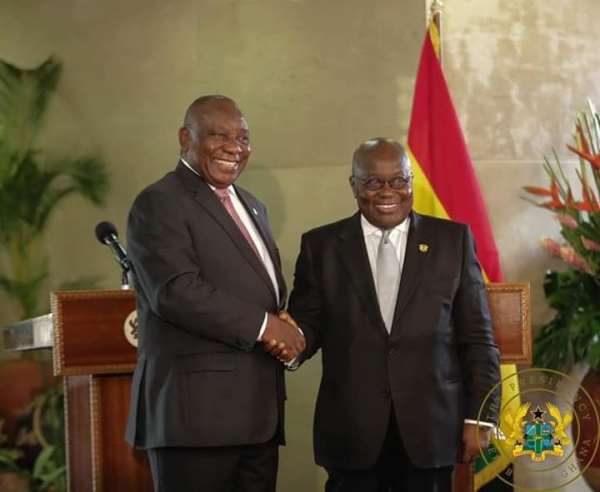 Ghana and South Africa have signed an agreement for the establishment of a Bi-National Commission to deepen the ties of co-operation and bonds of friendship between the two countries.

The signing of the agreement took place at Jubilee House, the seat of the nation’s Presidency, on Thursday, following a meeting between President Akufo-Addo and President Cyril Ramaphosa of South Africa, who is in Ghana for a 2-day official meeting

With the first meeting scheduled to be held next year, President Akufo-Addo said that the Commission “serve as the framework for closer co-operation, and, indeed, a strategic partnership that will bind our two nations in relations of greater intimacy and heightened mutual co-operation.”

According to President Akufo-Addo, “The close collaboration of stable, fully functioning democracies, such as ours, will give a great boost to the growth of stable, constitutional governance on the entire African continent, which can only inure to the benefit and welfare of the African peoples.”

Welcoming President Ramaphosa to Ghana, President noted that the South African President follows in the footsteps of three of his predecessors, Nelson Rolihlahla Mandela, Thabo Mvuyelwa Mbeki, and Jacob Gedleyihlekisa Zuma, who, during their tenures of office, paid visits to Ghana.

It was the sincere hope of the Ghanaian President that “relations between Ghana and South Africa, during our terms of office, will grow stronger, and continue to be rooted in the common struggle of our two peoples for the liberation of our continent from foreign control, in our shared commitment to the development of the new Africa on the principles of democracy, social justice, respect for human rights and the rule of law, and in our mutual determination to chart paths of self-reliance for the progress and prosperity of our peoples.”

“At the diplomatic level, our two countries have maintained excellent relations for well over two decades. On the economic front, South Africa is Ghana’s 2nd largest trading partner in Africa, with South African investments present in several sectors of the Ghanaian economy, he said.

The President continued, “I share wholly the vision of the possibilities of deeper trade and investment relations and co-operation between Ghana and South Africa. It is the most effective way towards building a sustainable future of progress and prosperity for our respective countries and populations, and maintaining a healthy relationship between our two nations”.

Thanking President Ramaphosa for the “exceptional gesture” of sending a delegation to him led by the respected Minister, Jeffrey Radebe, to apologise for the actions of the perpetrators of the violence in the recent xenophobic attacks, in which some Ghanaians were affected, the President stated that the apology was accepted in good faith.

He was, however hopeful, that the authors of the despicable acts will be apprehended to face justice, adding that “we should all pledge to ensure that such events are not repeated, and that the united Africa, for which we are working, will not be disfigured by the occurrence of such incidents.”

“There is much that Ghana can benefit from the now-acknowledged sporting prowess of South Africa, and, once again, let me congratulate you on your victory in Tokyo, in the Rugby World Cup,” he said.

The President continued, “Seeing you on television, holding the cup with the players, led by that great African, Siya Kolisi, was particularly satisfying. In addition, cultural exchanges between our two peoples, both of whom have such broad, outstanding, artistic talent, can only serve to strengthen the relations of amity and solidarity between us.”