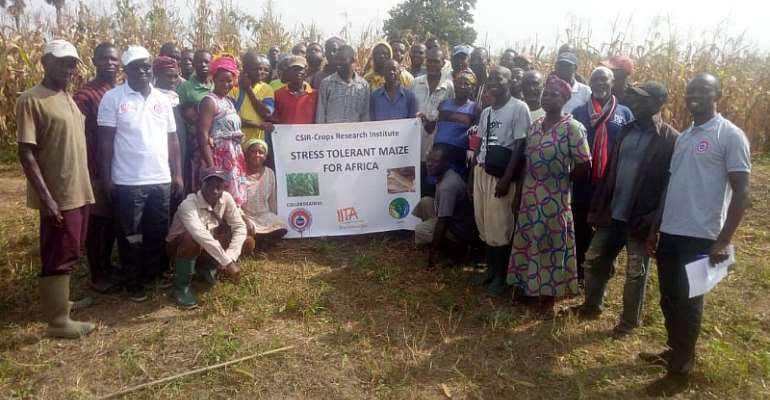 Research Scientists at the Crops Research Institute (CRI) of the Council for Scientific and Industrial Research (CSIR) and its international partners have developed a Stress Tolerant Maize variety to be adopted by farmers in Sub-Saharan African (SSA) where climate change is gradually becoming a major threat to food security.

The new (Stress Tolerant) maize variety has been introduced to smallholder farmers and actors in the maize production value chain at Ejura in the Ejura- Sekyere Dumase Municipality of the Ashanti region during a 'Farmer Food Day' event organized by the Crops Research Institute and its research partners.

Dr. Yeboah indicated that the project seeks to address the state of low crop yield in the region due to drought stress, low soil fertility, Striga or pest infestation, low inputs use and inappropriate seeds.

He pointed out that crop production in Sub-Sahara including Ghana is mainly rainfed and remains vulnerable to climate change hence the need for research institutions such as the CSIR-CRI to partner with local and international agencies in developing crop varieties that can withstand the present and future unpredictable climatic conditions.

He added that apart from it ability to do well even in a poor climatic environment, the drought-tolerant maize is also highly nutritious.

He pointed out that the newly developed maize variety has the potential to improve human nutrition and promise food security if the variety is adopted through widespread dissemination and promotion.

Dr. Priscilla Francisco Ribeiro, also a research scientist and Coordinator of Stress Tolerant Maize for Africa Project Ghana, emphasized that the current maize yield is not sufficient to meet future demand, stressing on the importance of developing the Stress Tolerant Maize varieties in Ghana.

She hinted that breeders and plant scientists at this climate change era are under intense pressure to improve upon the existing crops while developing new climate-friendly varieties that promise high-quality yields, rich nutrition, pest and disease resistance, and climate-smart.

She, therefore, urged farmers to fully adopt the Stress Tolerant Maize and recommended it to others.

The research team in a group photograph with farmers and stakeholders