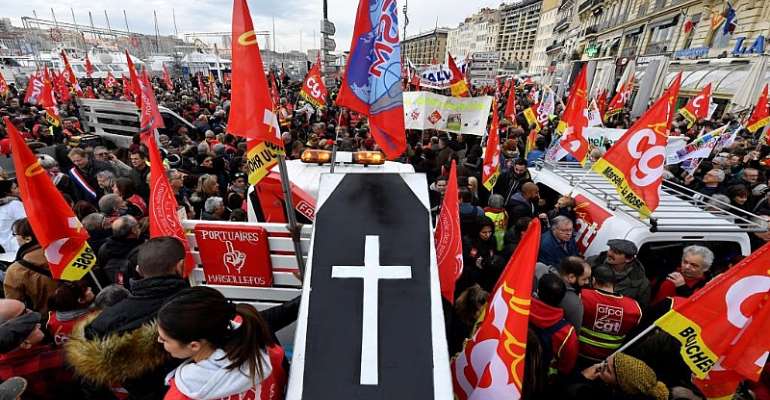 A national strike by French transport workers has brought the country to a virtual standstill. All seven unions are united against Emmanuel Macron's pension reform programme and predict the biggest demonstration in 25 years.

The Communist-aligned CGT labour federation and five other trade unions have called on members to support Thursday's strike. They say strike action will continue until their demands are met.

Only the moderate CFDT has refused the strike call, as it waits to see government proposals. Railway workers among the membership have, however, given formal notice of their intention to strike.

The government has not revealed the details of its plans for a "universal" pension system that has triggered the protests, but has conceded that people will have to work longer if the pension scheme is to remain financially viable.

The trade unions do not agree.
"Unless the government backs down on its proposal to introduce a points-based system, raise the retirement age and change the calculation of pensions, the strikes will continue," the head of the CGT, Philippe Martinez, told BFM TV Thursday.

President Emmanuel Macron, who has staked his reputation on reforming France, wants to put an end to the country's 42 retirement schemes and replace them with a unified system, so that all workers will have the same pension rights.

Extend privileges, not scrap them
The schemes grant privileges such as early retirement to rail workers and other professions where working conditions are tough.

For Martinez, the special provisions should not be scrapped but extended.

"When you work at night you have a lower life expectancy. Why are we not considering the people who work nights in hospitals, on our trains and roads? Night work must be taken into account," he said.

Ministers fear that hostility to Macron's reform will trigger a repeat of 1995 when former prime minister Alain Juppé was forced to drop a pension reform plan following weeks of strikes and demonstrations during Jacques Chirac's presidency.

"We are determined to force the government into a U-turn," says Regis Mezzasalma, a pensions adviser at the CGT union.

"We believe it's possible because the government so far has been incapable of proving how this reform will improve the conditions of workers and their pensions," he told RFI.

Unions united
"Instead of explaining what its plans are, it has tried to disqualify our arguments," Mezzasalma commented.

Many unions have warned that the strikes might run until Christmas.

Public transport workers in Paris will remain on strike until Monday, unions have already announced.

Nearly all the striking workers voted to remain off the job until Monday, Thierry Babec of UNSA union said, adding that the network would remain "at a virtual standstill" if the government did not abandon the reforms.

Experts believe the strikes may band the unions, traditionally divided, together.

They have been somewhat sidelined this past year by the Yellow Vests, who have been protesting against green fuel taxes and the president's economic policies.

The protests, hailed as a crisis of credibility for Emmanuel Macron, will also test the clout of the unions. They are banking on a massive mobilisation by both public and private sector workers to ensure a repeat of the "victory" in 1995.

‘There Won’t Be Conflict After December Elections’ – Akufo-A...
1 hour ago

Add Us To Bank Customers You Want To Settle – Menzgold Custo...
1 hour ago