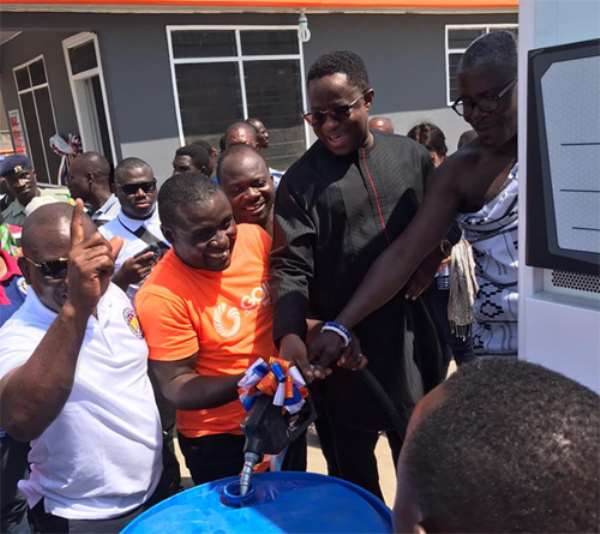 The National Petroleum Authority has handed over a total of six standard premix retail outlets.

The outlets are located in Winneba, Komenda, Apam Manford (all in the central region), Djameni in the Volta region, James Town in the Greater Accra region and Shamaa Adjoa in the Western region.

Speaking at the handing over ceremony of the Winneba premix outlet, Chief Executive of NPA, Alhassan Tampuli, said the construction of the premix retail outlets was a demonstration of NPA’s commitment to improving standards and safety in the petroleum downstream industry.

According to him, the construction of the premix retail outlets was fully funded by the National Petroleum Authority( NPA).

“Permit me to trip down memory lane. In June 2012, there was an explosion at the local premix retail point at Brawire, near Axim in the Western Region which led to the death of 19 people and many others injured,” he said.

He added that the accident brought to fore the unsafe practices of premix retail outlets at the landing beaches. Indeed, majority of these premix outlets did not have the minimum safety measures in place while Best Operating Practices were not being observed.

Additionally, the Chief Executive noted, lack of practical knowledge on the part of the attendants on basic handling and storage of premix rendered the operations of these outlets a threat to public health and safety.

To forestall the recurrence of such incidence in the future, the NPA in collaboration with GOIL, he said, developed and constructed a Prototype of a standard premix outlet, to serve as a standard reference for the Industry.

“This kind gesture of the NPA did not end there. The Board and Management of NPA took a further decision to construct these six additional outlets across the country as part of our Corporate Social Responsibility,” he said.

” It is our expectation that these retail outlets will serve the purpose for which they were constructed to ensure safe distribution and handling of premix at the respective landing beaches,” he added.

“It is indeed regrettable to note that since that accident in Brawire in 2012, there has not been any significant improvement in the handling of premix at the landing beaches inspite of the ongoing education.”

“In May this year, it was reported that four persons lost their lives in another premix fuel explosion at Kormantime in the Mfantsiman Municipality of the Central Region”, he noted.

“The burnt house had been stocked with barrels of premix fuel and the fishermen were drawing fuel from one of the rooms housing the fuel for their morning fishing expeditions. Per media reports one of the tenants in the house had set fire close to where the premix fuel was being brought out of the room, and in the process it resulted in an explosion,” he said.

The construction of the retail outlets commenced in 2015 between NPA and GOIL to provide safe and decent retail outlets aimed at eliminating the safety risk posed by the makeshift premix retail outlets along all the landing beaches across the country.

Minister of Energy, John Peter Amewu, in a statement, indicated that premix fuel distribution has really been a challenging one because of the subsidies on the product, and whenever there are subsidies, the distribution of the product tends to create rents, and when it creates rents all sorts of people come in the middle and the fishermen who are the ultimate beneficiaries do not even get the product because the products are smuggled to non-fishermen.

“These other people who are crooks in the industry tend to hoard the product and sell them later at exorbitant prices to our fisher folks or uses it to adulterate gasoline as a result of the significant price differentials between these products due to subsidies,” he said.

The current subsidy on premix fuel is 63% of the full price and this has risen from about 43% in January 2017.

This amount is projected to rise to about GHS206 million in 2019, he said.