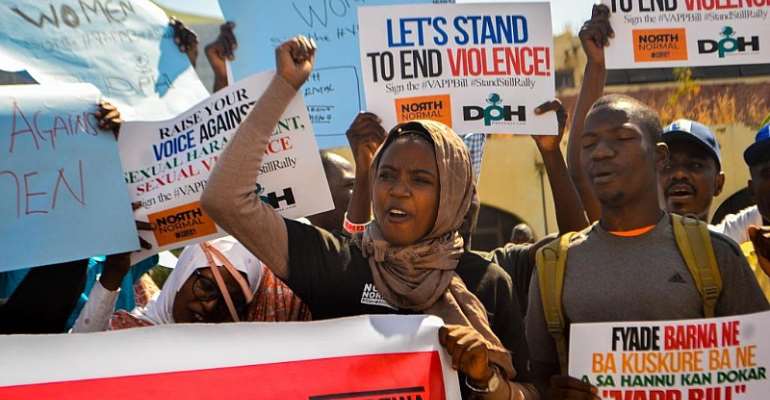 “Two of my colleagues were taken away by the police and I was beaten up,” Taheer told RFI adding “Now I'm the subject of a smear campaign that claims I'm a lesbian even though I'm not because I prefer men.”

#ArewaMeToo is a local spin off of the global #MeToo campaign. It was started by Fakhrriyyah Hashim who shared her experience of sexual abuse as a child on Twitter.

Arewa is a word in the Hausa language that refers to the north of Nigeria. A predominantly Islamic region, northern Nigeria is socially conservative.

“Sexual abuse survivors rarely speak out due to shame and issues of honour,” explains Sani Muhammad, a women's rights activist based in Kano.

Eleven percent of boys and 18 percent of girls surveyed in northern Nigeria say they have been sexually abused, according to USAID's 2018 National Demographic and Health Survey.

#NorthNormal campaign
To mark the International Day Against Violence Against Women on 25 November, activists launched the #NorthNormal campaign. Participants were asked to stage standstill protests with placards and t-shirts denouncing gender-based violence and sexual abuse over 16 days with the aim of pressuring governors to make the 2015 Violence Against Persons (Prohibition) Act law in their states.

The demonstration in Sokoto was aborted after the Sultanate Council's ban. “There are around 150 activists in the Sokoto chapter of the movement, but most of them felt too intimidated to come out and demonstrate,” says Taheer.

The police commissioner in Sokoto State, Ibrahim Kaoje, denied there had been an altercation between his officers and members of the #ArewaMeToo when contacted by RFI.

Amnesty International issued an appeal calling for information about the whereabouts of Idris Abbas who it says was arrested while filming Taheer. He has since been released, according to Taheer.

#NorthNormal demonstrations have taken place without incident in several cities in northern Nigeria, including Kano.

“We contacted the police before the demonstration,” Muhammad explains adding, “this meant they were sympathetic to our cause and we were able to deliver a declaration to Abdullahi Alfa, clerk of the Kano House of Assembly”.

Foreign agents
The reticence of the religious authorities in Sokoto and some political leaders to support #ArewaMeToo and other related women's rights movements is being blamed partly on the influence of Western countries.

The British Council, the EU, the UN and US embassy have given financial, logistical or moral support to activists involved in the #ArewaMeToo movement.

“It could be that our leaders feel threatened by this foreign influence,” says Taheer and continues “there are sexual abusers at all levels of society, so perhaps they are worried that enacting the law would result in them or their family members being prosecuted.”