As part of 2019 Farmers Day Celebration
By Mohammed Saani Ibrahim 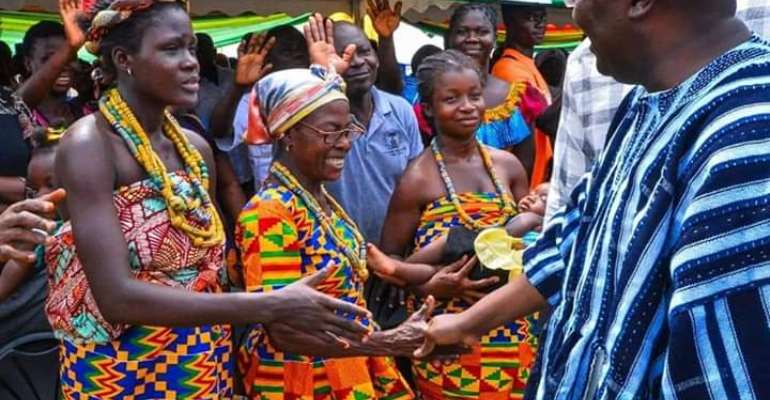 Ghanaians have been urged to buy locally grown rice this Christmas, on other festive occasions and for everyday consumption in order to give greater impetus to the agriculture sector.

Apart from saving Ghana millions of foreign exchange, increased patronage of locally grown rice would bolster production efforts, lead to increased investments, impact positively on the local economies of rice-growing areas and help achieve Government’s objective of ending the import of rice by 2024.

Vice President Dr. Mahamudu Bawumia made the call in Ho, Volta Region on Monday 2nd December, 2019 when he opened a one week Agricultural Fair as part of activities marking this year's Farmers Day celebrations.

“We are encouraging everybody to eat grown in Ghana rice. So for this Christmas as you go out to buy your rice, please make sure you are buying rice which is grown either in Aveyime, or Bolgatanga or Tono or somewhere in Ghana. Let’s buy and eat made in Ghana rice,” he urged.

Vice President Bawumia reiterated the commitment of the Nana Akufo-Addo administration to the agriculture sector, evidenced by the implementation of policies and programmes such as the various modules under the Planting for Food and Jobs concept, as well as increased supply of seeds, fertilisers, farming implements and Agriculture Extension Officers.

"It is obvious that since assuming the reigns of office, the government of President Nana Addo Dankwa Akufo-Addo has been walking the talk of its promise to maximize the enormous potential of agriculture. This agenda is being aggressively pursued with the support and partnership of the private sector and international community.

“We are doing a lot to modernize agriculture, improve productivity and to give agriculture the dignity that it deserves.

"The effects of these policies and programmes are being seen today. For instance, for the past two years, through the success of the Planting for Food and Jobs programme, we have stopped importing maize, and we project that by 2024, we would have stopped the importation of rice because of increased local production."

Government, Vice President Bawumia indicated, is doing its part not only to increase the amount of irrigated publicly available land through the construction of major dams such as Pwalugu and expansion of the irrigation potential of the Bui Dam, and the One Village One Dam in the northern parts of the country, but is also investing in the fisheries subsector.

"We have cut sod for work to begin on 10 fish landing sites along the coast and a Harbour at James Town. Government, through the Coastal Development Authority, has also procured 5,000 Outboard Motors to be distributed to fishers next month" he disclosed.

Vice President Bawumia urged players in the Agriculture sector to be abreast of changes in methods and the increasing introduction of technology into agriculture, noting “Today's agribusiness thrives on quick access to the latest, accurate and valuable information on new products, methods and systems of production as well as avenues for marketing of agricultural products.

“If we consider that the future of accelerated growth of agriculture depends on these, there is a need for greater awareness on the potential benefits that come with technology. Also important is the need for us to plan and coordinate our actions on how we are going to make the best use of technology to expand opportunities from access to inputs to disease control, farm management, harvesting and marketing.”

The One Week fair, which would showcase products from all 16 regions, would bring together key stakeholders such as farmers, aggregators, processors, input dealers, researchers, policy makers and implementers and provide an opportunity for networking and knowledge sharing.