...To Discuss On Administrative Justice And Judicial Review
Diaspora (Spain) 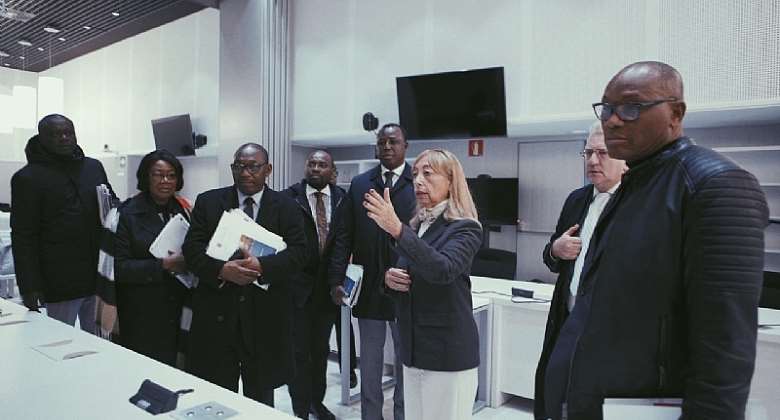 One of the objectives of this exchange of experiences is to obtain the best practices that can be applied in the reality of each country.

Accra, 25 November 2019 – A Ghanaian delegation from the Commission on Human Rights and Administrative Justice (CHRAJ), the Judicial Service and the Office of the Attorney General has participated in a five-day exchange of experience programme in Madrid, where they met with their peer institutions and analyzed the similarities and differences between Ghana and Spain best practices, systems and experiences that contribute to improving the work processes for each country.

The mission, organised through the European Union-funded Accountability Rule of law and Anti-corruption Programme (ARAP), implemented by the Spanish public foundation FIIAPP, has allowed six Ghanaian High-level officials to explore about different systems developed by each country regarding the protection of human rights, the management of the public administration in the three stages ruling in Spain: Ombudsman, Administrative procedures and Judicial Review before the special jurisdiction and the control systems of administrative acts in the protection of the rights of citizens.

The visit was coordinated by Ms Ana Sánchez, ARAP’s Team Leader and the delegation was composed of the Commissioner of CHRAJ, Mr Joseph Whittal, the Director of the Administrative Justice of CHRAJ, Ms Elizabeth Kufuor, the Director of Human Rights of CHRAJ, Mr Isaac Annan, Lordship from the Justice Court of Appeal, Mr C.J Honyenuga, Ladyship from the Justice Court of Appeal, Ms Irene Charity and Senior State Attorney, Mr Vincent Nyinaku.

The Ghanaian delegation started the exchange visiting the Spanish Ombudsman, responsible for guarantee the fundamental rights and public liberties of citizens by supervising the activity of public administrations. During the meeting at the Ombudsman office, they were briefed on the Ombudsman’s structured mandate and the reach and scope of its resolutions remarking the Spanish non-binding recommendation. Moreover, they underscored the fundamental role of the media, which supports the Ombudsman's resolutions in their reporting and analysed the migration situation and guarantee of the rights of the migrants.

They also went to the Ministry of Justice where they discussed with its peers counterparts the organizational, structural and functional systems of the administration in Spain and Ghana and the process of digitalization and technological progress in the planned administration services in Spain.

They ended with a session at the Office of the Attorney General where they discussed the nature, function: “in defending of the rights and the legality as a whole” which is the main difference with The State Attorney.

The delegation also paid a visit to the specialised Courts for Contentious & Administrative Law, located within the Superior Court of Justice of Madrid addressing the jurisdiction review system in Administrative litigation and explored how these cases apply to urban settings and development, defence of historical patrimony and the protection of the environment.

As part of the agenda, the Ghanaian delegation visited the Spanish National High Court , (Audiencia Nacional) where they analysed the European Human Rights Law and the Personal Data Protection including the right to be forgotten.

The agenda of the delegation also included a visit to the Supreme Court in Spain where they analysed the appeal for constitutional protection focus on urbanism, environment, immigration and international protection of the right to asylum. They ended up taking a guided visit to the historical building of the Supreme Court knowing its history through it.

The Ghanaian mission concluded its agenda by visiting the Criminal division of the National High Court. In Spain, as an example of the strategy of modernization and digitization of the Ministry of Justice in Spain.

This international visit is one of several interactions organised by ARAP that aims to support Ghanaian public institutions by establishing international networks and exposure to international best practices. It promotes inter-institutional coordination in common areas at a national level through the Ghanaian institutions.

About ARAP
The ARAP - Accountability, Rule of Law and Anti-Corruption Programme project joins the Ghanaian Government’s efforts to reduce corruption. This Programme is funded by the European Union Delegation to Ghana and is currently implemented by the Fundacion Internacional y para Iberoamerica de Administracion y Politicas Publicas (FIIAPP). This programme aims to promote good governance and support national reform, in order to enhance accountability and strengthen anti-corruption efforts across the country.