Death toll climbs in wake of devastating earthquake in Albania 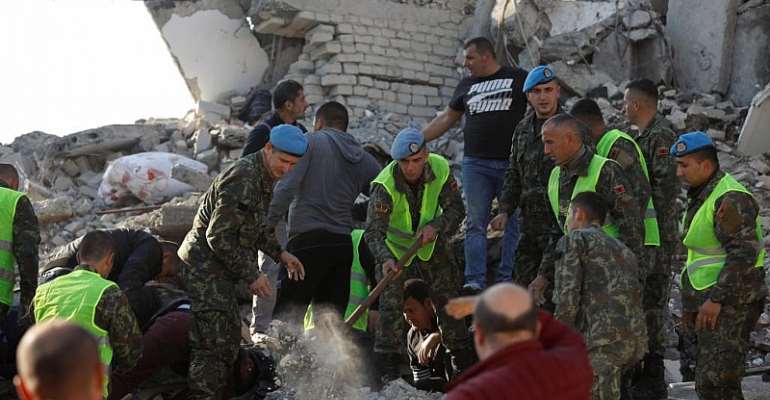 A rescue operation is underway in Albania, which was struck by a 6.4 magnitude earthquake on Monday. The quake, which struck at 3:54 a.m. local time, has killed at least thirteen people. A number of buildings have also collapsed.

Albanian rescuers were digging through rubble in search of survivors Tuesday after the strongest earthquake in decades levelled buildings and trapped victims under the debris, killing at least nine and injuring more than 600 people.

The epicentre was 34 kilometres northwest of the capital Tirana in the Adriatic Sea, according to the European-Mediterranean Seismological Centre.

The worst damage was in and around the coastal city of Durres.

Four bodies, including that of a young girl, were pulled from ruins in the port city, where a hotel collapsed and other buildings were badly damaged, the defence ministry said.

Emergency help
Three more bodies were found in the nearby town of Thumane, where soldiers, rescuers and families sifted through the rubble of a collapsed five-storey building.

In the town of Kurbin, a man is his fifties died after jumping from his building in panic, while another perished in a car accident after the earthquake tore open parts of the road, it said.

The tremors were felt across the Balkans, from Sarajevo in Bosnia to the Serbian city of Novi Sad almost 700 kilometres away, according to reports in local media and on social networks.

Albanian Authorities described it as the strongest earthquake in the last 20-30 years.

The Balkans is an area prone to seismic activity and earthquakes are frequent.