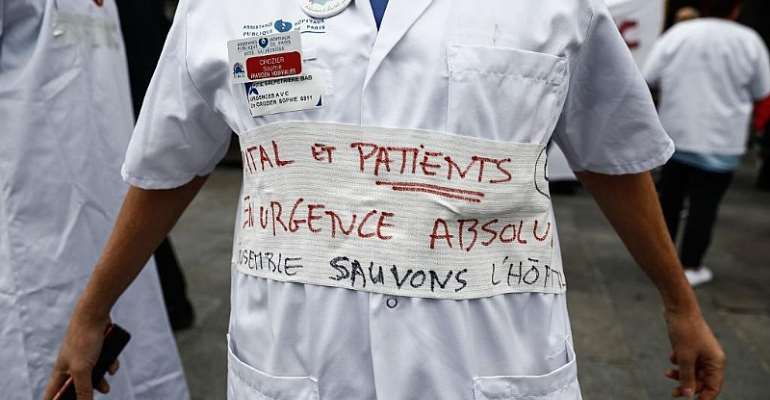 Hundreds of French hospital workers are expected to turn out for a massive demonstration on Thursday, over dire conditions in the public health system.

In an op-ed published in the daily Le Monde newspaper on 13 November, 70 directors of public medical establishments expressed their frustration over a system facing a complete breakdown.

"We can't do a good job in these conditions," they wrote.

"The hospital is sick."
Thursday's march, organised by a new collective, is supported by all the major unions and brings together health workers regardless of rank.

It comes on the back of a series of strikes and demonstrations held since March.

Among the demands being made are more funding, payrises, in particular for those on low salaries, hiring more staff and providing more beds.

"Resources, staffing, conditions...why the whole hospital system is on strike this Thursday," wrote the collective known as Inter-Urgences on Twitter (inter-emergency wards)

Student doctors and health workers have also said they will join the protest.

The unions are encouraging workers to cancel any non urgent medical procedures.

French health minister Agnès Buzyn announced funding in September, but this clearly did not meet the protesters' demands.

In a testament to the crisis, in Toulouse on Wednesday, 13 staff members administratively resigned from their jobs to protest over their working conditions. They will continue however to take care of their patients.

Unions are expecting a huge turnout for Thursday's demonstrations, ahead of government measures due to be announced soon.

The Parliament is also currently preparing the 2020 budget.