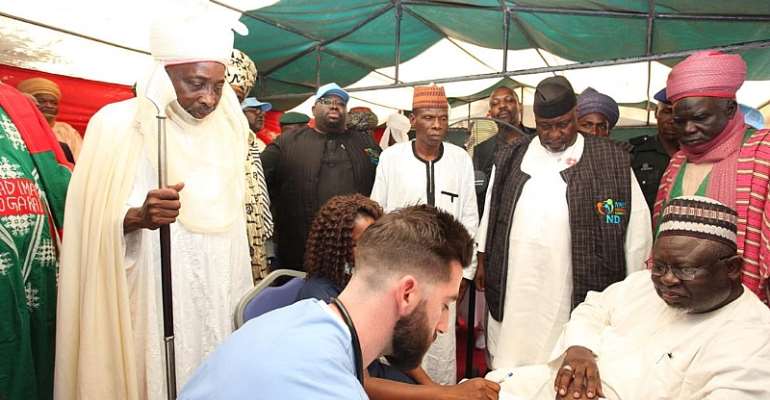 The three-day exercise which began with a Gala Night at the Dutse residence of the founder of the foundation, Alhaji Nasiru Haladu Danu; according to Wabiye Idoniboyeobu, Media Spokesperson to Alhaji Nasiru Danu (Dan Ammana Dutse) “witnessed a large turnout of dignitaries from within and outside Jigawa State.”

A statement made available to journalists by Mr. Wabiye noted that the main exercise commenced on Saturday the 9th of November with the arrival of the NHD Medical Team in Dutse. The Medical team were accompanied by their partners from the United States of America. Together the teams are to offer free medical care to an initial 5000 beneficiaries. These 5000 Men, Women, Boys and Girls were randomly selected from all the communities in the Dutse Emirate. Future intervention will also include education and skills aquisition.

Text of the statement reads: “The Emir of Dutse His Royal Highness, Alhaji [Dr] Muhammed Nuhu Sanusi was on ground to witness the commencement of the exercise. He carefully visited all the treatment points and watched closely as his people received medical attention from the American specialists. He also presented an Award of Excellence to the Dan Amana Dutse, Alhaji Nasiru; in appreciation of the kind gesture the Dutse people were witnessing.

“In his remarks the founder of the foundation, Alhaji Nasiru said “We are here again in Jigawa today because of the vision we have for our people. With the aid of our partners and the Jigawa State Ministry of Health, the NHD Medical Mission is here to create a platform where my brothers and sisters in Dutse can get free medical attention and support.

“We are also here because it is evident that in spite of the laudable efforts of the government our people still need our help, support and assistance. We have decided to pick up the challenge and help in whatever way we can, especially in the healthcare and educational sectors. This is a vision we must achieve together. Government cannot do it alone. Neither can I. We all have to join in.

“Some of us have big ambitions and big dreams; while some just dream of making it through the day. But in all this, one hope we all share is to live a healthy life. This is why we have decided to better organize our outreach and build awareness.

“Also, earlier in the day, the Foundation, in a bid to maintain the resounding peace in Jigawa State, donated Four (4) vehicles to the SSS and Seven (7) utility vehicles to the state police command. The police vehicles were received by the Assistant Inspector General of Police incharge of the Zone. The AIG on behalf of the Inspector General of police, thanked the foundation for the donation and resounded the Police command’s commitment to securing lives and property of all Nigerians. He thanked the men and women of Jigawa for the co-operation they had given the police and assured Alhaji Danu that the vehicles will be put to the use they were designed for.

“Some of the dignitaries present at the gala night include, The Executive Governor who was represented by the Secretary to the State Government, Alhaji Abdulkadir Fanini Adamu, The Chief of Army Staff who was represented by the Brigade Commander, 3 Brigade, Brigadier General B. A. Alabi, The Chairman Dutse Local Government Area, The Turaki Dutse, a Prince from the Niger Delta region, Prince Tonye Princewill and well-wishers from far and wide. Top entertainers from the Northern community serenaded the guests with musical masterpieces and gave the launch an atmosphere unrivaled. Some of the entertainers present include Almauzu and Alan Waka.”

I don’t know him – Afoko denies knowledge of prosecution wit...
4 minutes ago