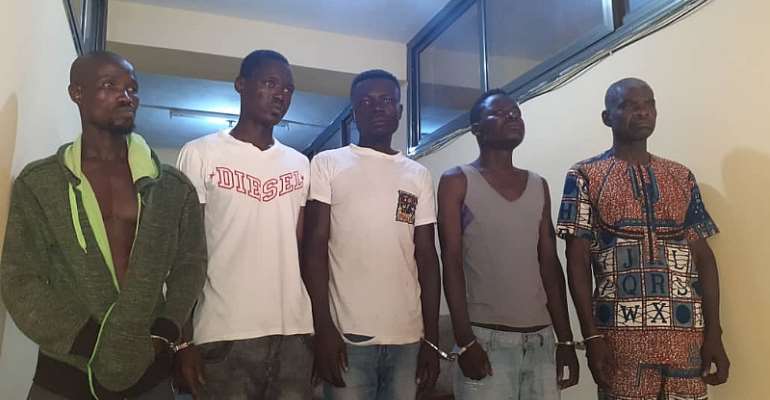 The Volta Regional Police Command has arrested six persons in connection with a robbery incidence at Kings Oil Filling Station located in Peki-Wudome in the North Dayi district.

The robbers attacked the said filling station and made away with more than Ghc2,000.00 and other valuables.

The six including a gospel preacher are currently under investigation in the region.

According to the Volta Regional Police Commander, Deputy Commissioner of Police (DCOP) Edward Oduro Kwateng said, the command upon intelligence on the 9th October laid surveillance leading to the arrest.

He said, the arrest aided by Peki-Wudome Neighbourhood Watchdog Committee, led to three suspects, Godfred Alorvordzi, a trader aged 45, Felix Dupe, an Evangelist aged 31 and Raphael Agbo a driver who is 31 years old at their hideouts.

The police said the car for the operation is owned by suspect Adzaho Evans, a taxi driver.

Shockingly , suspects, Felix Dupe and and Edem Fiati are "standing trial in another robbery incident within the Ho Municipality, but are on bail" the police said. Meanwhile the six suspect, a former employee at the Kings Oil Filling Station is on the run.

DCOP Oduro, commended efforts of the the Peki-Wudome Community Neighbourhood Watch Committee for their role played in arresting the culprits.