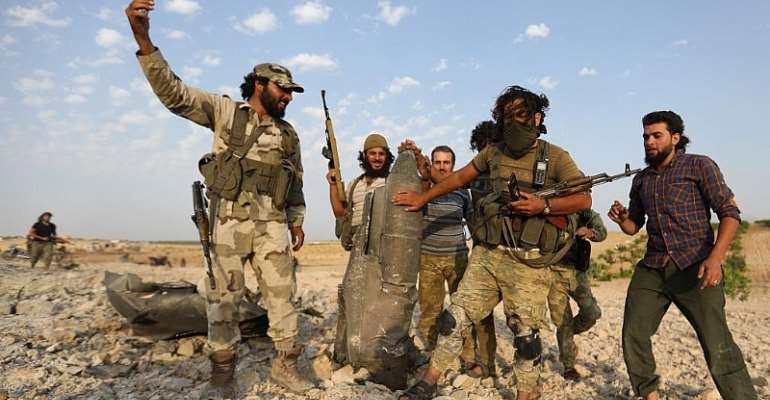 Turkey's preparations for an offensive in northern Syria have been "completed", the defence ministry said on Tuesday, two days after President Donald Trump ordered the withdrawal of US troops. France is set to become the largest foreign power on the ground. But for how long?

According to the Russian Tass News Agency quoting Syrian media, attacks on Kurdish strongholds in northern Syria started early Tuesday with airstrikes against a command center in the north-eastern town of Al-Malikiyah, destroying two bridges. The information could not be independently confirmed.

The Turkish Ministry of Defence said in a press release on 3 October that Turkey's final objective is “to put an end to the presence of DAESH/PKK/PYD/YPG and all other terrorists in the north of Syria,” putting the Kurdish PYD/YPG – allies of the US in their fight against Islamic State (or Daesh) in the same basket as the terrorists.

The French Foreign Ministry on Monday issued a statement calling upon Turkey to “avoid any initiative that would run counter to the interests of the Global Coalition against Daesh, of which it is a member,” pointing at “significant humanitarian consequences” and warning that “the prosecution and secure detention” of Daesh fighters who are currently in detention in northeastern Syria, “are a security imperative.

“This is the ideal political situation for Erdogan,” says Günter Meyer, director of the Center for Research on the Arab World at the University of Mainz.

“He can follow through with promises which he has given to the Turkish people to create a security zone in northern Syria."

The global players in the area, the US, Russia and the EU won't lift a finger, he thinks.

“Trump is threatening sanctions if Turkish troops do not behave in a humane way. For Erdogan this is just a joke. Trump, who threatened he would 'wreck Turkey's economy' if Turkey goes on with the offensive, broke promises to Turkey repeatedly.

Meanwhile, the Russians have become major players in the region with their backing of the Syrian regime of Bashar Al-Assad.

“President Barzani expressed his worries regarding the future of Kurds in Syria to the Russian Foreign Minister and asked that Russia play its role in case of any event or change to prevent further suffering and pain of the Kurdish people in Syria,” a statement from the office of KDP president and former president of the Kurdistan Region, Masoud Barzani, read,” according to Rudaw.

“Putin is expanding Russian influence in Turkey – a Nato member, which is a strong disadvantage for the US.

“Russia wants to keep this continuously improving relation with Erdogan, in particular as far as delivery of weapons is concerned, economic cooperation is concerned.

“Russia will certainly object verbally to the planned intervention and verbal objection is also something which shows they are supporting the Syrian government.”

But he doesn't expect that Putin wants to put a lot of pressure on Erdogan to stop the intervention.

“He doesn't want to lose his partner, his growing influence.”

Refugee problem
Meanwhile, EU member states are extremely concerned about some 11,000 Islamic State fighters being held in various Kurdish detention centers – some 2,000 of them carry EU passports, 1,500 of them French.

But, thinks Mayer, the 200 or so French troops that are in the region to support the 2,000-plus US troops won't be able to contain the situation.

“The French will definitely also retreat, following the American example,” he says.

“They are not able to counter an attack from the Turkish army, the strongest army and air force in the region."

Apart from verbal protests from the EU, there's not much that can be done.

“Erdogan has the great 'advantage' of the refugee problem,” says Mayer, pointing at the 3.6 million Syrian refugees who currently reside in Turkey.

“The EU will verbally object to an intervention, but it doesn't constitute a real threat."

Erdogan can threaten to open the border to all Syrian refugees, flooding Europe and also freeing the ISIS people jailed in the Kurdish Area as well. "The EU has no interest in getting involved,” Mayer says.