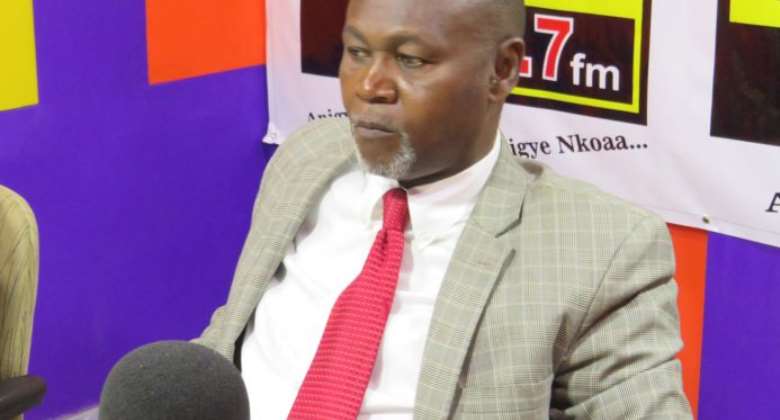 Former Member of Parliament (MP) for La Dadekotopon, Hon. Nii Amasah Namoale has taken a swipe on Ghana’s Special Prosecutor, Mr. Martin A. B. K. Amidu saying doesn’t have the credibility to be the Special Prosecutor.

According to Hon. Namoale, Mr. Amidu has failed abysmally at executing the duties of the Special Prosecutor due to his emotional disposition and the deep-rooted bitterness in his heart, particularly towards NDC members.

He said the office’s credibility and impartiality must be maintained by dealing with both past and present cases of corruption.

“Mr. Amidu has failed Ghanaians totally, he raised several allegations many minority MP’s but has failed in prosecuting them, he is a talkative and has no credibility,” Nii Amasah Namoale exclusively told Kwame Tutu on Anopa Nkomo on Accra-based Kingdom FM 107.7

He said he might be the one likely to be charged after his tenure of office as nothing shows he is working.

According to him, after his appointment as Special Prosecutor, no work has been executed by his office, though he draws a salary from the public purse.

President Akufo-Addo gave a Presidential Assent to the Office of Special Prosecutor Bill and four other bills key on the agenda of his administration.

The President noted that the establishment of the Office of Special Prosecutor was an important step in the government’s determination to root out corruption from public offices.

Many have hailed the appointment noting that the self-styled citizen vigilante’s credibility as far as the position is concerned, is unquestionable.

Others in the ruling New Patriotic Party (NPP) are jubilating following the appointment since in their opinion corrupt officials in the erstwhile Mahama administration will face prosecution.

According to Martin A. B. K. Amidu, the heads of the institutions were either failing to release information or deliberately withholding information needed to fight corruption in Ghana.

A statement issued by Mr Amidu in Accra, titled: “Challenges of the Office of the Special Prosecutor in Fighting Corruption in Ghana”, said his outfit would be compelled to sue defiant public institutions and the Attorney-General (A-G) if the problem persisted.

“The Office of the Special Prosecutor Act empowers the office to enforce the production of information and documents in the courts against any public institution that fails or refuses to honour the lawful request of the office,” it said.

More Politics
ModernGhana Links
Government's town hall meeting on E-levy a charade; sign of desperation – Bernard Mornah
Restoration of road tolls: When we get to the bridge we’ll cross – Roads Minister
'Dangerous' Ofori-Atta wants to use e-levy as collateral to keep borrowing – Isaac Adongo
I forewarned Ofori-Atta as finance minister would be ‘dangerous’ – Isaac Adongo
E-Levy won’t bring about any negative changes in consumer behaviour – Communications Minister
E-levy will turn many lives around; government will be transparent with it  – Afenyo-Markin
‘Talk Tax’ was successful despite opposition, E-levy won’t fail either – Ursula Owusu
We cannot continue to depend on loans for development; let’s embrace E-Levy – Ursula Owusu
Bawumia discusses covid-19, vaccines and Africa’s security with U.S Security of State
TOP STORIES