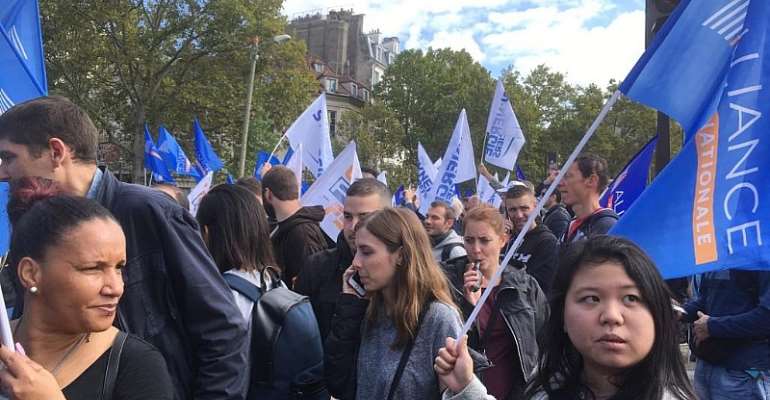 French police have staged a “march of anger” in Paris, protesting against conditions which have led to 52 suicides in their ranks since January 2019.

Thousands gathered in the Place de la Bastille at the start of a march expressing mounting resentment in the police service.

Amid looming pension reforms, police officers fear changes to retirement packages that currently take account of the dangers they face during their working lives.

But Wednesday's march was about a deeper malaise within the police service.

One trade union leader described a “profound unhappiness” among the ranks.

The police say they are under massive strain after a period of 4 years marked by terrorist attacks as well as violent protests. They have also had to ensure security for major international events and combat rising crime.

On top of that, they are dealing with the policing of the almost weekly Yellow Vest protests, where a small hard core of radicalised demonstrators as well as hard-left agitators sometimes seem intent on violence.

One protestor who gave his name as David talked of colleagues who had “cracked up”, saying that the number of suicides showed there was a real problem in society and that “the government and the president are not reacting”.

Equipment not good enough
Another wanted “more respect from the population and the authorities” including “politicians”. Recently far-left politician Jean-Luc Mélenchon was widely criticised after he was overheard describing police as “barbarians”.

With some officers reporting difficulties in their family lives after working up to six weekends in a row, Interior Minister Christophe Castaner has promised action over the 23 million hours of unpaid overtime, which amounts to 250 million euros in outstanding wages.

He told French television on Wednesday that the budget for the police service has increased by more than a billion euros since Emmanuel Macron became president.

Trade Minister’s promise to open Komenda Sugar factory ‘a me...
47 minutes ago