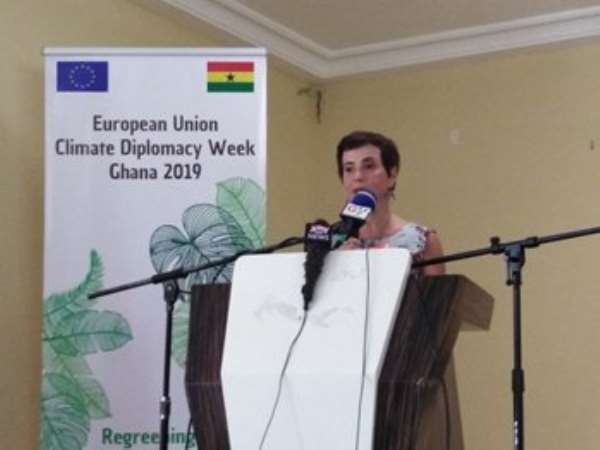 The European Union (EU) has cautioned Ghana to be proactive in restoring its degraded forest and tree cover following the changing climatic conditions.

“The government needs to take drastic action to reverse the trend for the sustenance of the ecology,” Diana Acconcia, the EU Ambassador to Ghana, noted, saying it was imperative that a lot of investment went into re-afforestation.

Addressing a workshop in Kumasi dubbed: “Re-greening Ghana”, she indicated that the nation’s forest and tree cover currently stands at about 26 percent per the EU records.

The situation had been compounded by the mass illegal felling of trees, indiscriminate bush fires, urbanization and other development projects.

According to the Forestry Commission (FC), the current rate of Ghana’s forest depletion was two percent of the remaining 1.6 million hectares of forest cover every year, due to illegal logging.

The nation had 8.2 million hectares of forest cover at the turn of the Century.

The programme, hosted by the Kumasi Metropolitan Assembly (KMA), was in line with the ‘EU’s Climate Diplomacy Week’, which is designed to raise awareness on climate change issues.

It was also to solicit support from the government, stakeholders and civil society organizations to improve the environment in the face of the dangers posed by climate change.

Acconcia said the EU was seriously partnering governments all over the world to engender global response to the threat of climatic change in the context of sustainable development.

“We need collaboration and commitment to promote a green world,” she noted, saying this was critical for the livelihood of mankind.

Mr. Osei Assibey-Antwi, the Metropolitan Chief Executive (MCE), briefed the participants on the ‘Keep Kumasi Clean and Green’ project, which is intended to restore to the city its former status as the ‘Garden City of West Africa’.

Under the project, a substantial number of trees of varied species had been planted across the metropolis to improve the environment.

He affirmed the resolve of the Assembly to work with the EU to enhance biodiversity for the wellbeing of the citizenry.