Photographing the murderous liberation of Mosul 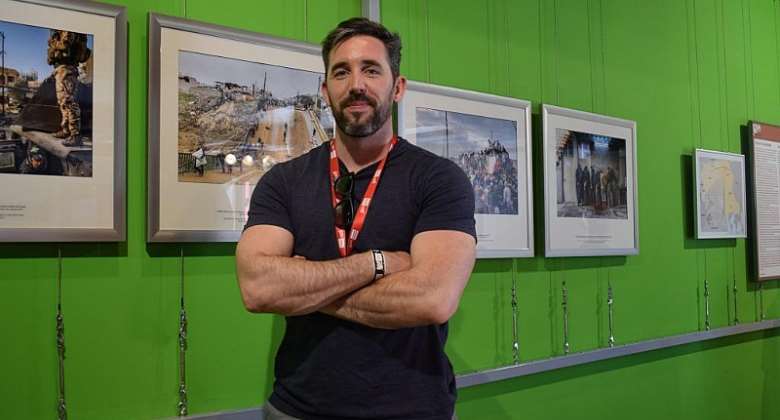 In October 2016, Iraqi Special Forces launched an operation to take back Mosul and other parts of Iraq from the Islamic State armed group. But the operation to liberate them proved terribly dangerous to those caught in the fighting. One photographer met those in the crossfire and told their stories through his camera lens.

36-year-old Ivor Prickett is an Irish photojournalist who has done a lot of growing up professionally since relocating to the Middle East just before the start of the Arab Spring in 2011.

Having left the region, he returned to Mosul during the drive to liberate the Iraqi city from the Islamic State armed group.

His photos from that period brought the stories of the Iraqis caught in the middle around the world, through the pages of the New York Times and other major publications.

They were also on display here in France at the photojournalism festival Visa Pour l'Image.

His exhibition was called 'The end of the caliphate'.

Under the caliphate
“It was just like they pressed a button. Everything changed in two days,” says Omar Mohammed, the author of the 'Mosul Eye', a website dedicated to documenting the atrocities committed by IS during their time in power.

“They issued orders, a list of 'if you do this, this will happen to you'. They started to publicly execute people. Behead people in the street, arrest more people, and impose more rules, taking Mosul back to the Middle Ages,” he recounted to RFI during an interview in 2018 after his escape from his city.

No one believed that the push to take back territory from IS would be easy, but not only was it difficult, it got dirty.

IS consistently used residents as human shields from the advancing Iraqi army.

That meant people were constantly caught in the cross-fire while trying to remain hidden from the fighting.

“It was really interesting as the Iraqi soldiers would move into an area, people would just slowly start coming out of their houses and opening their gates and peering out and checking out who it was and then they would come out and start kissing the soldiers,” describes Prickett who had embedded himself with the Iraqi army to gain more access to the heart of the fighting.

“The one thing I noticed was that everyone was just pale: just completely white, having not seen the sun in weeks because they had just been cowering inside because the fighting was so intense.”

Going towards the action
Prickett had gone to Iraq to freelance with a focus on humanitarian stories. But after some time, he soon realised he needed to do more.

“As the conflict developed, I realised that the real kind of humanitarian crisis was happening inside, like right behind the front line where people were caught in the middle of this fighting. . . so I really started to realise that I had to get to that point if I wanted to tell the story, the humanitarian story. And that's how I ended up probing further inside.

Knowing that IS is one of the most feared and deadly terrorist groups out there, one has to wonder: what makes a person, especially one not from that region, decide to stay and probe further inside.

“I think there's a certain fascination in being in those environments and I definitely have that. If you don't have that. . .that interest and fascination, then you're never going to end up there,” the photographer explains on the sidelines of his exposition in Perpignan.

In the case of Prickett, those environments began during his time spent in the Balkans years after the Bosnian war had ended.

“The Balkans was very present in the early 2000s. And so that's how I ended up being drawn to that. And it just kind of evolved from there.”

But switching over from long-term projects to breaking news, such as the front lines of the Iraqi operation to take back Mosul, requires a different set of skills.

Empathy seen through a lens
Being on the ground while news was breaking left, right and centre meant there was little time for Pricket to connect to subjects.

“I found that I still could somehow…bring that kind of level of empathy that I seem to be able to convey in pictures where I'd spent time with people, even in a fleeting moment. Not to the same extent, but somehow still a bit.”

It sounds a bit abstract, but when you look at the photos taken by Ivor, it begins to make sense.

“Even the photo of the ISIS fighter as they are lifting him out of the rubble. In some ways that's still quite a sympathetic photo of him. He looks broken and fragile. That troubled me in a way because he was part of a terrorist organisation that had brought that part of the world to its knees and killed thousands of people. But at that moment he was still just a young man, same age as me. I remember feeling sorry for him, and that was weird. That was jarring,” Prickett explains while reflecting on the image he took.

The fighter had been badly injured, about a week before. He was in contact with the Iraqi army, announcing his surrender if he could be taken to a doctor.

“And the guys, the Iraqi army soldiers, were like 'yeah…we'll take you to a doctor'. And they dragged him out. And it was really, it was very surreal the whole thing because it was very rare to see a self-proclaimed ISIS fighter still alive. We saw a lot of dead ISIS members, but very few alive.”

Culture and intrusion
As we walk around the gallery, I ask about another photo that shows a woman standing at her doorstep that has blood splattered on it, screaming while her arms are stretched out in front of her, questioning the situation.

The boy died en route to the first aid station, two minutes after being hit with shrapnel wounds in his chest.

The photo was taken just after his mother realised he was dead.

“She's screaming, but, a lot of people thought that it looked like she was screaming at me and asking me why I'm taking the picture. But it wasn't that at all… this is what mourning is like in Iraq; it's like a very outward gesture. She's screaming at the situation, she's screaming at ISIS, at the Iraqi soldiers. Like, why has this happened?”

In a situation like that, a moment when the photographer clearly has stepped into a very intimate situation, I ask Ivor if his initial instinct was to comfort her rather than photograph her.

“It's really tough. My natural instinct in a situation like that is not to take a picture, and just say sorry and kind of hang my head in shame because there's nothing I can do about it. But I know from working in these kinds of situations and particularly in this region. If you're there, that's your job. That's inherently your job if you're there. That's what people want you to do as well. So I was being asked to take this picture because I was the only foreign journalist there….so that's a huge responsibility in a way,” adds Prickett.

Especially in Middle Eastern culture, witnessing such an intimate moment of a woman is not always easy. But in this case, he was able to capture that moment, and in doing so, tell the story of another woman who lost her son to the cross-fire fighting between IS and the Iraqi army.