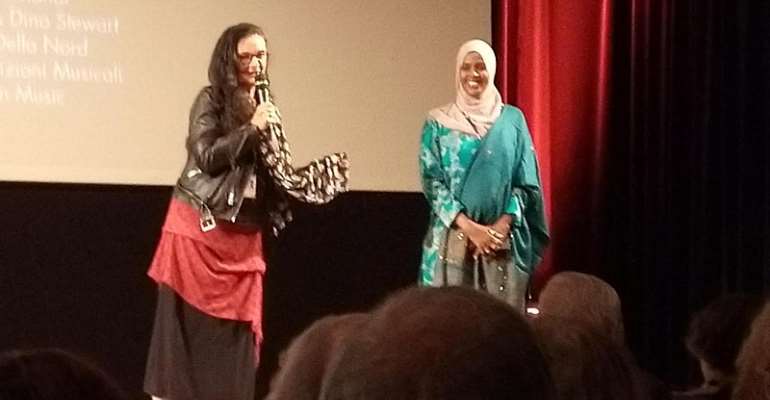 Two films offer fresh view of films on African issues, as well as on immigration and integration in Europe at the Dinard Film Festival dedicated to British films. A Girl from Mogadishu and The Last Tree. They share a hope-giving perspective.

Is The Last Tree in UK or Nigeria?
This is a big question for youngsters like film director Shola Amoo who was born in the UK of Nigerian parents and who was, like Femi, the protagonist in his film, left to foster parents as a child and before adolescence retreived by a parent. He personally is sorted now “I respect both identities,” he said.

The tree is a metaphor for “the family tree and of having ties to your culture, heritage, lineage which the lead character doesn't have at the start of the film,” explains Amoo when asked for the umpteenth time what the title of his film means.

The Last Tree which follows Femi from childhood into young adulthood is vying for the Golden Hitchcock against five other films in 2019.

“It's semi-autobiographical,” said Amoo who sets Femi's story in three settings which seemingly have little connection, Lincolnshire in the English Midlands, London and Lagos.

As well as “challenging and informing” the lead character, the three distinct environments allow Amoo to pursue a particular style.

“I started in documentary, then first feature multimedia film, a feature length visual art project. I'm always trying to shoot fiction with that kind of sensibility, fluid, about discovery, a bit like documentary, but very stylised at the same time,” he said.

Amoo's cultural identity reveals itself in his artistic interest for the work of film makers like Terrence Malick and Lynne Ramsey while keeping watch on developments in Nollywood, “I like their entrepreneurial get –up-and-do-it energy.” Even if The Last Tree being nominated for the Hitchcock d'or has brought him to France for the first time, Amoo said French director Jacques Audiard's Un Prophète had a major impact on his 2019 Dinard Festival entry.

In one special screening, a full house of about 300 people watched Irish director Mary McGuckian's, film based on the harrowing experiences and escape from Somalia by Ifrah Ahmed, womens' rights campaigner.

The film traces Ahmed's life from the time her grandmother arranged for her uncle, a doctor, to excise her and her female cousins when they were about 8 years old. She is then married off to a man more than 30 years older than her, and when she runs away, her father and brother can't protect her and she is raped by militia men. Her uncle arranges for her to leave to get to the USA via Ethiopia. However, the man who helps her takes her to Ireland instead, where she seeks asylum.

Active and focused
The young Somali woman's story lends itself to big-screen dramatization with a distinct African story set in a war zone in the first half, followed by another world entirely, Ireland. McGuckian doesn't dally far from Ahmed's own experiences, even if some of the horrible experiences were "watered down in places," said the director.

McGuckian has made films about footballer George Best and designer Eileen Gray (The Price of Desire).

She said "What was most difficult was that Ifrah is a very young person who still has her life ahead of her. So apart from the legal aspects of it, there was a massive moral responsability to tell the story in the way that would work for the issue, would work for Ifrah and would work as an Irish and Somalian story."

Ahmed said she worked throughout the whole process with McGuckian from writing to costume advice for the lead actress Aja Naomi King.

Bridges
"It's been a heck of a journey trying to understand the story ever since meeting Ahmed, commented McGuckian of the experience." She added with a big smile and chuckles that "It was lovely to have the communal experience. There's so much synchronicity between Irish and Somalian is very similar such as slagging and poetic oral tradition."

After the film in Dinard, McGukian and Ahmed, now an Irish citizen, answered questions from the audience about female gential mutilation (FGM) and about her ongoing combat to end the practice of excision on girls and to empower women.

Both women were moved by the number of people who had turned out and who had stayed to exchange with them.

Ahmed said even though her Irish citizen helps her do many things, “it's still a risk to go back to Somalia because of the militias. But if it means I can save a girl from being cut, I want to take the risk.”