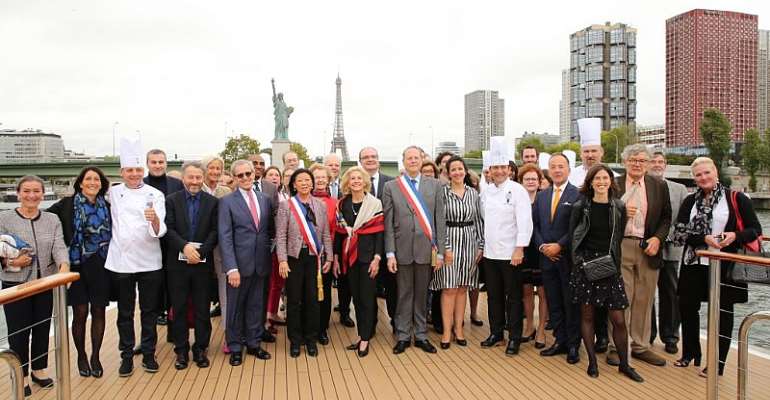 A replica of the Statue of Liberty was gifted to Parisians by Americans living in France in 1889, three years after her bigger sister was unveiled in New York.

At 11.5 meters tall, the Statue of Liberty overlooking the Seine river in Paris is 83 meters shorter than her sister in New York. Both statues were designed by French sculptor Frédéric Auguste Bartholdi as symbols of French-US friendship.

“Fund raising was on a private basis,” André Cointreau, president of the culinary school Cordon Bleu, explained to guests aboard a boat trip to celebrate the 130th anniversary. “So, the French community living in America raised funds for the statue in New York, and Americans here in France did the same three years later.”

Bartholdi was inspired to create the Statue of Liberty following a conversation with his friend and fellow Frenchman, Edouard de Laboulaye, who was president of the French Anti-Slavery Society.

Laboulaye was looking for a way to celebrate the North's victory of the South in the American civil war, and President Abraham Lincoln's subsequent decision to abolish slavery.

Three smaller replicas were made based on the original sculpture, including one that is in Bartholdi's hometown of Colmar in eastern France, another that was made for the Luxembourg Gardens in Paris. The latter had to be moved to the Orsay Museum in 2012 after its flame was stolen.

Cultural diplomacy
The third replica towers above a purpose-built island in the Seine river. It was commissioned by Americans in France, and inaugurated during the same year as the nearby Eiffel Tower on 4 July 1889 by the then French prime minister Marie François Sadi Carnot.

There are far fewer visitors to the Statue of Liberty in Paris than to her older and bigger sister in New York. But a steady stream of tourists do visit and take selfies. The statue continues to represent its original purpose of celebrating French-US relations that are bound by principles of liberty.

“Liberty for me is being able to say what I want, think what I want, work for what I want, achieve what I want,” Jamie D. McCourt, the US ambassador to France and Monaco told RFI during the ceremony marking 130 years since the Statue of Liberty was gifted to Paris.

Modern Ghana Quote Reports
Catch up with all the political quotes from our politicians.
Sponsored
More US & Canada
Modern Ghana Links
Tiger Woods undergoes surgery after car crash in LA
AHRC holds its First Virtual Zoom Discussion of 2021
Half of Americans want Senate to convict Trump
PDL welcomes Joe Biden's American Presidency
Larry King, giant of US broadcasting, dies at 87
US virus deaths top WWII fatalities as Biden warns worst yet to come
'We wanted to be a part of this change' say Biden supporters outside US Capitol
Biden calls for unity as sworn in as 46th President of United States
Biden sworn in as 46th US President
Quote Reports Dossiers
TOP STORIES