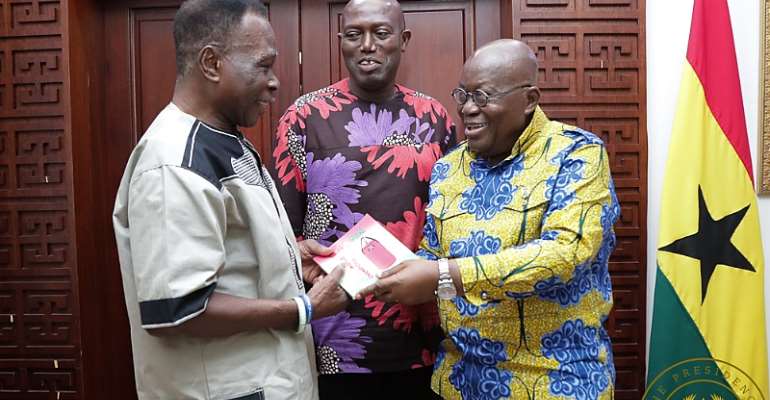 President Akufo-Addo, has promised he would look into the lingering case of the State possibly owing David Kotei, Ghana's first World Champion.

"I'm making no promises but we'll look into it," promised His Excellency Nana Addo, today, when he met with a delegation of former World Champions, led by author, Ekow Asmah, whose book, GHANA BOXING: Celebration of Our Champions was endorsed by the President's esteemed signature.

Earlier in the course of the delegation's courtesy call ahead of the launch, Thursday, at the Bukom Sports Emporium, D. K. Poison decried the failure of the State, over the years, to reimburse him $45, 000 of his $75, 000 purse in his second defence of his world featherweight title against Shig Fukuyama, in Tokyo, in 1976.

That $45, 000, stated D. K. Poison, was used to import mackerel into the country during the reign of the late Head of State, Gen. Ignatius Kutu Acheampong, an emergency measure aimed at restoring calm in the face of mounting tensions owed to economic hardships faced by his compatriots.

Kotei recounted failed attempts during past administrations of Presidency to reimburse him the aforementioned amount, to which President Nana Addo charged the Sports Minister, Isaac Asiamah, to reconcile the paper trail of the claim with Kotei's former counsel and current president of the Ghana Boxing Authority, Peter Zwennes, to get to the bottom of the case.

President Nana Addo recognised the hallowed place of boxing in raising the profile of the country, having produced 10 World Champions the book seeks to celebrate and immortalise.

He commended the author on his work in preserving the exploits of the immortals of the sport, inspiring other professionals for similar work in the future.

Other members of the delegation were Roger Barnor, a WBC Referee/ Judge, and Herbert Mensah, President of Ghana Rugby, the facilitator of the occasion.