Did Ghebreyesus Commit Crime Against Humanity Before Becoming WHO's Director-General? 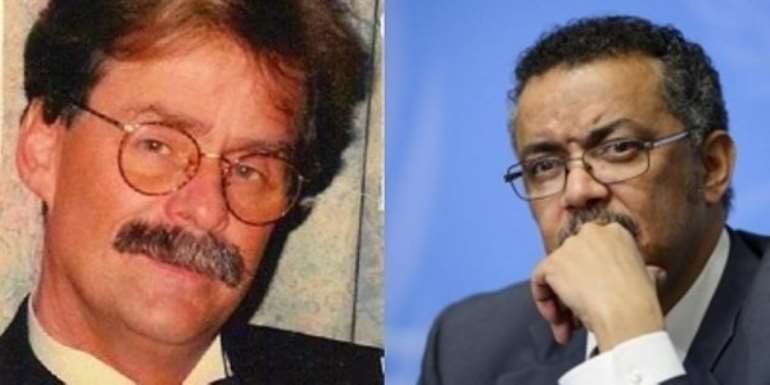 On October 6, 2018, my co-writer at ‘Secrets Of Aids and Ebola Facts Journal,’ Joel Savage, posted an article: Why Tedros Adhanom Ghebreyesus A Corrupt Health Official – on ModernGhana news site, then on November 21, 2018, I followed with an article: Can Tedros Ghebreyesus Tell The World The Truth About Ebola?

Actually, no matter what problems Africa has gone through, the continent should have been better but the fact that many world leaders collaborate with some corrupt African leaders have worsened the situation in Africa.

Well, below is an article about the corruptible Director of The World Health Organization, Tedros Adhanom Ghebreyesus, which disqualifies him in the first place to be appointed WHO’ Director.

The article entitled Did The Director Of WHO Committed Crimes Against Humanity? Was released in Dutch by ‘Stichting Vaccinvrij,’ on September 5, 2019.

The Ethiopian Tedros Adhanom Ghebreyesus was elected the new general manager of the World Health Organization (WHO) in Geneva in early 2017. He was protested against his appointment because he was suspected of corruption and was one of the confidants of a repressive regime.

Shortly before his appointment, the Amhara Professionals Union (APU) open letter below appeared on the website of the Ethiopian news site 'Ethiopian News and Views' (ECADF). The Amhara are one of the two largest ethnolinguistic groups in Ethiopia (the other group being the Omoro).

The Amhara Professionals Union is a US-based advocacy group consisting of doctors, scientists, and lawyers. Their letter is based on a research report in which 13 points, including discrimination, corruption, crimes against humanity, where 2.5 million people would have been victims, show that Ghebreyesus is not suitable for the position of president of the WHO. The report is no less than 70 pages long.

Below you will find a partial translation of the open letter that presented the report to the members of the WHO. It is unclear to say the least, how it is possible that someone with such a reputation has been chosen as director of the WHO.

DEAR SIR / MADAM,
The Amhara Professionals Union (APU) presents objective facts about Dr. Tedros Adhanom Ghebreyesus, who proves that he is unsuitable to be one of the finalists for the appointment of WHO Director-General, let alone win. and assume this role in a few months.

Amharas is one of the largest ethnic groups in Ethiopia, covering more than a third of the population. The Amhara Professionals Union (APU) is a non-profit organization based in Washington DC consisting of doctors, scientists, lawyers and other professionals of Amhara origin.

APU defends the rights and interests of the Amhara people against the heinous crimes committed by the current TPLF / EPRDF-led regime for more than twenty-five years. APU believes that Dr. Ghebreyesus is a very poor choice for this position and that he disgraces the core values ​​that the WHO stands for.

Human Rights Watch and many other national and international organizations have voiced much criticism of the TPLF / EPRDF-led government for crimes against humanity and atrocities against the Ethiopian people.

The attached document provides objective evidence why APU believes that Dr. Ghebreyesus lacks competence, impartiality, responsibility and transparency that we consider necessary for a position of this size. The document contains 13 points, including:

We urge WHO members to look at the attached document: “International Organizations Leadership Recruitment Policies: the Failed Experiment or Dr. ir. Tedros A. Ghebreyesus Candidacy for WHO Director-General position.

If you have any questions or need more explanation, please do not hesitate to contact us,

Amhara Professionals Union (APU)
Washington DC, USA.
It did not help. The message from APU was ignored and Tedros Adhanom Ghebreyesus was elected the new general manager of the World Health Organization in early 2017 in Geneva.