Alain Keler:The makings of a photographer 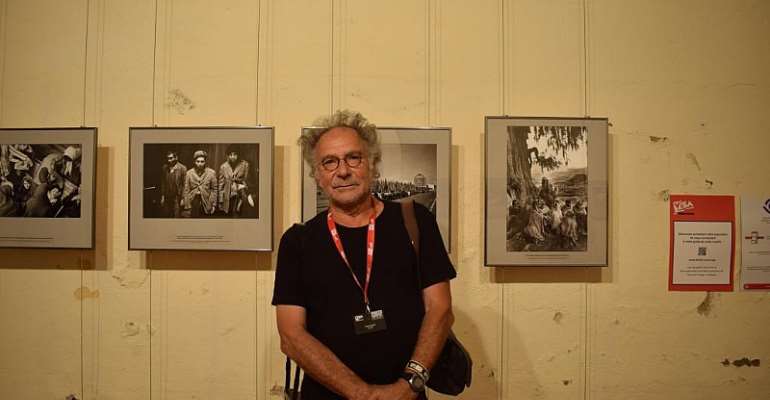 What makes a person grab a camera and set off ito a conflict zone to take photos? Is it the adrenaline rush? Is it the notoriety of snapping the best photo? Or is it simply the strong need to tell the story of those caught in the middle of the fight?

Seventy-three-ear-old Alain Keler has been a photojournalist for over 50 years,. However, he describes himself as a photographer and not a war reporter.

With his son and wife at his side at the Visa Pour L'image festival in Perpignan, Keler has been making the rounds of interviews and press conferences without any hint of fatigue as he talks about his photo exposition on display.

The man exudes an energy that he has surely needed for all the work and travelling he's done over the years.

Since the late 1960s, he has photographed a wide range of conflicts from the Ethiopian civil war in the 1970s to the Gaza war in the 2000s.

Trademark photo
While taking photos for his news agencies, he always carried around a small Leica camera with a 35mm or 50 mm lens.

He snapped photos that were just for his personal use and were removed from the gore or the fighting.

These kinds of photos have always remained in that rich black and white, a classic but trusted style.

“This is what I like in photography. This is one of the reason why I did photography I guess It's the first [type] of picture [I saw] when I started, so I kept taking those pictures that way” Keler explained  to RFI on the sidelines of the photojournalism festival.

Making good photo
What is he looking for in that flash of a moment when a photograph is taken?

“Human interest. People. I like the people. And I'm basically taking pictures of people, whatever kind of situation” says Keler.

“But I think the people in the middle of the conflict are the ones we're relating to, you know you have someone being killed or someone crying. . . it's a way to show that the situation for these people is absolutely terrible.”

He has now moved to digital, more because he feels obliged to than interest in this format.

In an effort to get acquainted with digital, he started a blog seven years ago.

“I told myself I don't know if I can do personal work with the smartphone, so I decided to shoot one picture a day for one year. 365 days. I started writing things with that. And then after one year I said ok, I stop. And then a few people looking at my blog said 'no, we like to read you, we like to look at your pictures'”

And so he began reaching into his old photos from years gone by and uploading them onto his blog accompanied by notes he had taken at the time.

Falling into photography
Keler didn't dream of being a photographer.
Yes, he liked to take photos. But as an only child he dreamed of travelling.

While his parents often fought, he would lose himself in radio broadcasts about far-off places.

Once he came of age he bought a little camera and went travelling with a backpack.”

Afterwards, he began working in a publishing house and saved enough money for two cameras.

That's when he decided to travel the world.
“I didn't mean to become a photographer, but I wanted to photograph because for me it was really an important way of showing the world and as I was very, very shy, [it] was a way for me to get near the people”.

His camera became his tool to bypass any language barriers.

And in doing so, became the photographer he is today.