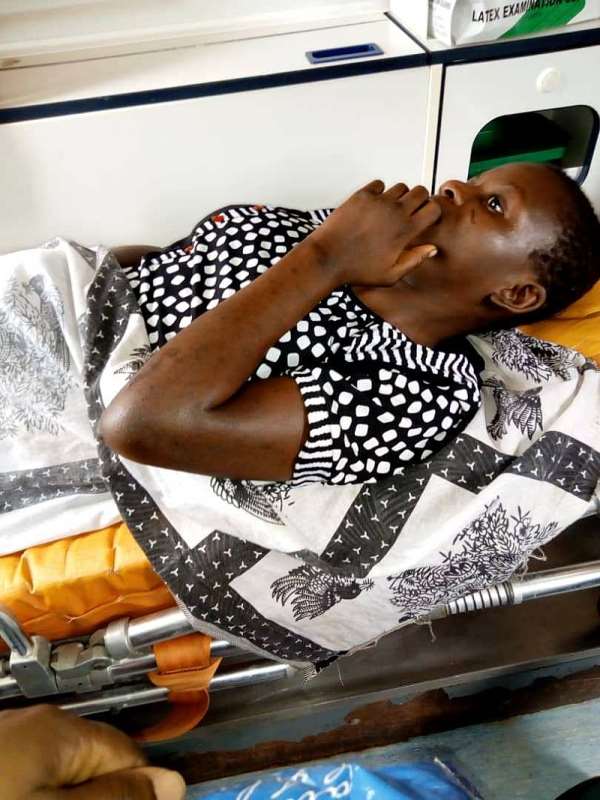 The rapist who identifies as Bukari, reportedly raped his step-daughter, Ama Akoto, several times when the victim’s mother, Afia Konadu, traveled to their hometown. Afia Konadu left her sick daughter with her husband Bukari who claimed to have herbs that will make Ama Akoto walk again.

According to the victim, Bukari asked her to sleep with him for monetary support and gifts, to which the victim declined. Bukari then forced himself on the paralyzed teenager and strangled her so she could not scream for help. The victim added that Bukari threatened to butcher her with his machete if she were to tell her mother or anyone about it. Scared of what might happen to her, the victim kept her painful experience to herself.

Interview with the victim’s mother

In an interview with BisaGhana.com, Afia Konadu told the reporter that “When my daughter was young, she got sick and had some skin disease so we took her to the hospital for treatment. It was after the treatment that she became paralyzed. From that time on she could no longer walk. She could only move around by crawling. By that time, I had separated from my ex-husband with whom I had seven (7) children. The burden of taking care of these 7 children was too much me to bear since I had no job. My younger sister took my paralyzed daughter to live with her at Nkawie and I also moved in with my current husband, Bukari, with whom I have two (2) children. He told me that he has some herbs that will make my daughter Ama Akoto, walk again. I travelled to my hometown to bury my ex-husband who died about a year ago, but when I came back, I realized that my daughter couldn’t crawl again and she has also developed full breast and a protruding belly. I asked her what has happened to her but she refused to tell me. It was later on that I found out that she was pregnant and almost due for delivery. Because I had no money to take her to the hospital, she delivered her baby at home”.

However, the reporter through the interview observed that, the victim’s mother wanted to keep the issue from going out to the public domain, and it would have been so if not for the family midwife who found the victim during her routine check on her clients in the area.

Ms. Angela Boakye-Acheampong, is a senior staff midwife at Mankranso District Hospital. As was their duty, she and her colleague midwives at the ANC department routinely go round the district to follow up on their clients who are registered with the hospital. They also supplement their home visiting efforts with phone calls to find out how the clients are responding to treatments, their health status, their eating habits, how the baby and the mother are faring, and all other health-related issues. However, on 15th August 2019, while on her routine check, Ms. Boakye-Acheampong met the victim’s mother carrying the new baby at her back. She called the victim’s mother and through their interaction, she found out that the child was delivered at home and the baby’s mother was paralyzed. She then followed the victim’s mother to their place of abode to find out the condition of the nursing mother and how she was coping with her condition. On their arrival, Ms. Boakye-Acheampong found the completely paralyzed Ama Akoto, lying on the floor of a very dilapidated structure believed to be where she and her baby sleep. Ms. Boakye-Acheamong then alerted the matron of the hospital and the social welfare department of the district assembly. The matron of the hospital requested for the district ambulance service, and in the company of the ANC in-charge, the victim and her baby were picked up and sent them to the NHIS office to prepare their insurance before taking them to the hospital where they are both receiving medical attention. All these expenses were covered by the matron and the family midwives at the ANC department.

The Department of Social Welfare under the Ministry of Gender is a government statutory agency that is mandated to promote and protect the rights of children, provide justice and administration of child-related issues, and provide community care for disabled and needy adults (Children’s Act, Section 105-114).

Although the department of social welfare (DSW) in Ahafo-Ano South District were properly informed about the incidence, they have so far not been able to provide any support for the victim. The only support that came from the DSW for the victim and her new baby was from the personal expenses of the head of the department and it included some used clothes and some toiletries. The DSW could not even obtain an NHIS for the victim and her baby when the incident happened because the DSW is owing the NHIS in Mankranso. The DSW also bemoaned their lack of adequate capital to carry out their constitutional mandates.

However, when the reporter contacted the personnel at the DSW on 25th August 2019, he indicated that they are yet to write their report on the situation, something that was supposed to have been done a long time ago. It is not very clear now whether it is the fault of the DSW at Mankranso or lack of adequate capital. Either way, the Department of Social Welfare has not been effective in carrying out their constitutional mandates.

Interview with the CID at Mankranso

The investigative officer of Mankranso Police Station, Mr. Mohammed, hinted that their preliminary investigations indicate that the suspect, Bukari, started raping the victim about two years ago, and especially when the victim’s mother was not around. He also added that Bukari threatened to kill the victim if she told anyone about it and because the victim was afraid she kept it to herself until she got pregnant. However, no arrest has been made yet, and Bukari is walking around free.