Go to parliament and debate on ROPAB 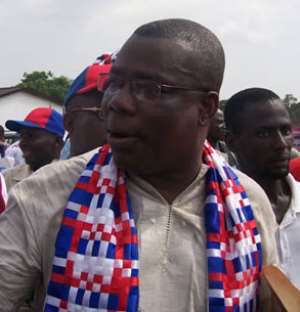 - Mac-Manu to NDC MPs Tema Manhean, Feb. 15, GNA - Mr Peter Mac-Manu, National Chairman of the New Patriotic Party (NPP), has challenged Members of Parliament (MPs) of the National Democratic Congress (NDC) to return to parliament and debate the Representation of the People (Amendment) Bill (ROPAB), in fulfilment of their responsibilities to the electorates.

He stressed that, the MPs were voted to represent the electorate in parliament and debate on their behalf, adding that, they should not forget that laws were only passed in parliament and boycotting would not have any effect on the passage of the ROPAB.

"NDC MPs must go back to parliament and speak their views without intimidating anybody in any way," he said.

The NPP National Chairman further cautioned the NDC to desist from associating rigging of elections to ROPAB, as the NPP won the 2000 and 2004 elections without rigging.

He commended the President, Interior Minister and the Inspector-General of Police for ensuring a violent free demonstration, by not interfering in the rights of the demonstrators, as otherwise done in passed governments.

He stated the reasons for his visit as to introduce himself to the Mantse and to acknowledge the support of citizens of Tema West to the NPP, since 1992.

He indicated that, the New Patriotic Party (NPP) government recognized the contributions of chiefs and traditional authorities to the growth of the nation's development and therefore, the government could not achieve anything without the involvement of chiefs.

Mr Mac-Manu therefore, entreated chiefs not to hesitate to call them to order, should they go off guide and added that, the NPP government was a peaceful government and would adhere to any advice that would help move the nation forward.

The NPP National Chairman said the government has decided to buy the Volta Aluminium Company (VALCO), which would be provided with raw materials from Kibi to absorb the unemployed youth of Kibi and Tema. He said the government has also allocated over one trillion cedis in the 2006 budget to cater for youth skill training for industries, as well as practical vocation training centres being established to provide training for the youth.

Nii Adjei Kraku II, Tema Mantse urged the NPP National Chairman to take an international politician as his mentor to propel him to greater heights.

He said in the course of their duty, the NPP executive should see to it that, they would not create any troubles but rather bring all into peaceful existence.

Nii Kraku II congratulated and urged Mr Mac-Manu to do all he could to fulfil the promises he gave during his campaign, as politicians turn to neglect their promises after getting the votes into power. He used the opportunity to call on the government to commission the Tema Manhean street lights to enable them make good use of the facility, as it was becoming a white elephant.