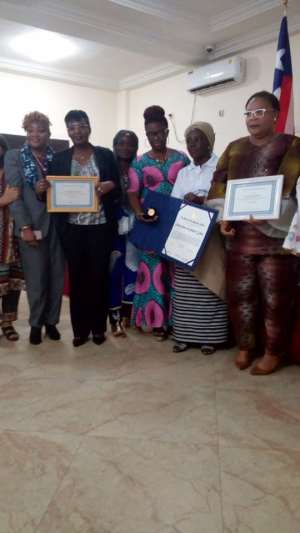 MGCSP also applauded UNFPA for coordinating the travels and participation of Madam Annie Nushann, who was proudly nominated by the Gender Ministry as the representative Laureate recipient of the award, at a ceremony held at the United Nations Headquarters in New York, USA.

The United Nations Population Fund on Thursday, June 20, 2019 presented the Institutional Category Award to the National Peace Hut Women of Liberia. This annual award honors Institution and/or Individual for outstanding contributions to population and reproductive health.

It can be recalled that upon receiving the calls for nominations from the Permanent Mission of the Republic of Liberia to the United Nations through the Ministry of Foreign Affairs, the Ministry of Gender, Children, and Social Protection, under the signature of Minister Williametta E. Saydee-Tarr, submitted an application in the institution category for the annual UN Population Award through the Permanent Mission.

According to UNFPA, the National Peace Hut Women of Liberia is a recipient of the Institutional Category Award, due to their indelible impact in helping women and former child soldiers become agents of change in their communities following Liberia’s civil war. The Peace Hut Women provided safe spaces for survivors of gender-based violence and rape.

The presentation of the Award to the Government of Liberia was held on Thursday, August 15, 2019 at the Millennium Guest House in Oldest Congo Town Monrovia. The program which was organized by the National Peace Hut Women of Liberia in collaboration with the UN Entity for Gender Equality & Empowerment of Women attracted dignitaries, Civil Society Actors, CSOs, etc.

Presenting the award to the Government of Liberia, Madam Annie Nushann thanked the Liberian Government for her supports to Peace Hut and she expressed how proud her Institution is to present the award to the Liberian Government. “We thank the UN Family for the award and it is a sign that women of Liberia should unite, respect, and honor the peace of the Country and work together to move the Country forward”. Madam Nushann stated.

Receiving the Award on behalf of the Government of Liberia, Gender Minister Williametta E. Saydee-Tarr conveyed that it is a direct representation that the work of the National Peace Hut Women of Liberia was appreciated and did not go unnoticed, as exemplified by the conferring of this prize on them, by the United Nations Population Fund, (UNFPA).

“This award has come at a right time for women especially so that the President has signed into law the Domestic Violence Act of 2019, which shows that the Government of Liberia is making strides in fighting for the rights, protection and economic empowerment of women”, Minister Tarr stressed. The Gender Boss stated that a lot can be achieved when women of Liberia unite and work together.

Special remarks were delivered by the Swedish Ambassador to Liberia, H. E. Ingrid Wetterqvuist, Nobel Laureate Leymah Gbowee and Madam Marie Goreth Nizigama, who were all honored by the National Peace Hut Women.

Ambassador Wetterqvist for her part, shared that the National Peace Hut Women of Liberia was the first institution that she learned about when she first came to Liberia. She further observed that Liberian women have not fully grasped the collective strength they have. She therefore called on them to begin talking about poverty, challenges women faced and the legacy of the war- as there is no better healing time then now.

The Ambassador called on Liberian men to walk out of their comfort zones and support Liberian women in fighting for their rights. “My Government mandated me to talk about gender issues, women issues and men Issues - as they relate to gender equality”, the Swedish Ambassador concluded.

Nobel Laureate Leymah Gbowee recounted her role in the formative stage of Peace Hut history and called on the women of Liberia to stay engaged in peace building, advocating for women’s rights and work collectively for the common good of all as government cannot do it all.

Madam Marie Goreth Nizigama congratulated Peace Hut for the excellent work done. The UN Women Country Rep said that the Peace Hut Women have shown that the Women of Liberia can take the lead in all aspect of the country when it comes to peace, leadership and fighting issues of gender based violence. Madam Nizigama mentioned she has seen Peace Hut women play the role of Police in various communities fighting GBV issues like rape. “I want to really commend you and remind you to continue to play the role particularly now- because you can’t take peace for granted, you have to continue to work and sustain the peace” Marie Goreth Nizigama averred.

Speaking with the press after the event, Minister Tarr reaffirmed the Weah-led Government’s continued support of actors in peace-building, as exemplified by the honoring of the Women in Peace Building Network by H.E. President George M. Weah, during the Investiture Program of the 171st Independence Program held in July of 2018.

When asked what is next for women, Min. Tarr added that Government’s interventions in protecting women and children come from the highest authority in the land in person of the President, and that to this end, he has signed into law the Domestic Violence Act that has been on the shelves for years.

Republic of Liberia
MINISTRY OF GENDER, CHILDREN AND SOCIAL PROTECTION