Management Calls For Calm As They Await Gov't's Bailout 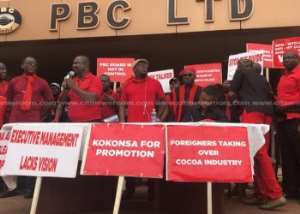 The Management of the Produce Buying Company (PBC) is confident the assurance of a bailout by the government will turn the fortunes of the company around.

PBC has been bedevilled with a myriad of financial challenges, a situation the current management of the company has consistently blamed on the poor decisions of its predecessors.

On Tuesday, hundreds of PBC workers across the country besieged the premises of the company's headquarters in Accra to register their displeasure about what they describe as the appalling state of the company.

But Speaking to Citi News, the Managing Director of the Company, Kofi Owusu Boateng, said he was optimistic that the president would come through with his assurance to see PBC back on its feet.

“If you don’t have money, you can’t work. This is the situation I came to meet. That is why finally, I had to take them to the President. The General Secretary and I went to see the President. We met the Agriculture Minister, Deputy Finance Minister and Labour Minister. So we have been working day and night and the assurance is that I trust the President; if he gives us the money then we can turn our fortunes around. “

During the protest, the workers said the current management is “short of ideas, lacks vision and foresight.”

“We are demonstrating simply because the company is not on its proper mandate and therefore it is necessary for us to demonstrate for the government to know the state in which the company is.”

“Where we have gotten to, if the government does not come in, the company will collapse. We are demonstrating because the management was given to us and the board needs to give way”, they said.