Take A Critical Look At Inhibiting Factors Of Funding Sources 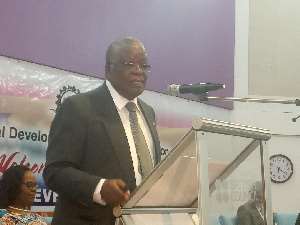 The Chairman, Economic Policy Committee of the National Development Planning Commission (NDPC) has said that although most of the suggested sources of funding for development has been around for some time now, the problem was, "the lack of access to most of the funding sources because of our inability to satisfy preconditions for doing so."

According to him, it is about time for us to look at these inhibiting factors so that we can gain access to all available financing sources.

He was speaking at a forum organized by the NDPC as part of a series of dialogues on national development,its financing, and how the Ghana @100 agenda would be achieved under the theme, “Innovative Financing for the [email protected] Development Agenda”.

"As the country has weaned itself off a stimulus package under the IMF Extended Credit Facility Program and has openly declared a "Ghana Beyond Aid", it is a bold and drastic step towards its new phase of development." He mentioned.

The Economist thinks this feet in the Nations development is attainable because it is an African-wide agenda because it is tied in with the African Development Bank Initiative after the International Financial crises of 2008, when external flows to the developing world slowed down drastically.

He was also of the view that proper and efficient financing must be dictated by the type of project and its extended maturity.

Dr. Nii Kwaku Sowa also looked at the two major classses of financing; fiscal and non-fiscal. With the fiscal, he was concerned about that which goes in to support the National budget. He suggests that we need to open up our budget and look at ways for enhancing both tax and non-tax revenue.

"We must also check how expenditures can be made more efficient, claim value-for-money and eliminate waste of resources", he pointed out.

Similarly the Economist made certain revealing observation of the country's economy saying the country has a huge infrastructure gap that needs to be filled if it must move on to the high middle-income status. Also, other important public services needs to be provided by government.

Another observation he made was the optimal use of revenue mobilization. Ghana’s tax revenue is 15.8 percent of GDP due to recent rebasing. This is lower than about 21 other African countries. Tax revenue in any serious developing Nation must average between 23-25 percent GDP.

On sources of non-fiscal funding for Ghana's development over the next 40 years, he explains that Ghana is a country rich in natural resources, however, one has not seen much the contribution of our major traditional exports to the development of the country. For instance, the government is said to have reached an agreement with the Sinohydro Group Limited of China to provide US$2 billion worth of infrastructure in exchange for access to part of Ghana’s extensive bauxite deposits in the Eastern Region. This agreement is a barter. He finds this worrying and problematic. He sees it as just another form of tied aid and we must know exactly what we are going in for and the gain to the country.

Lastly, a similar way he thinks as a nation we can harness and increase growth is through Remittances by Ghanaians in living in the Diaspora.

In 2018 alone, Ghanaians abroad remitted home about $3 billion. However, this only goes into home construction and other consumption activities. He suggests that the country considers the introduction of Diaspora bonds as debt instruments by the government to serve as a viable alternative to borrowing from the international capital market and other multilateral Development Finance Institutions (DFIs).