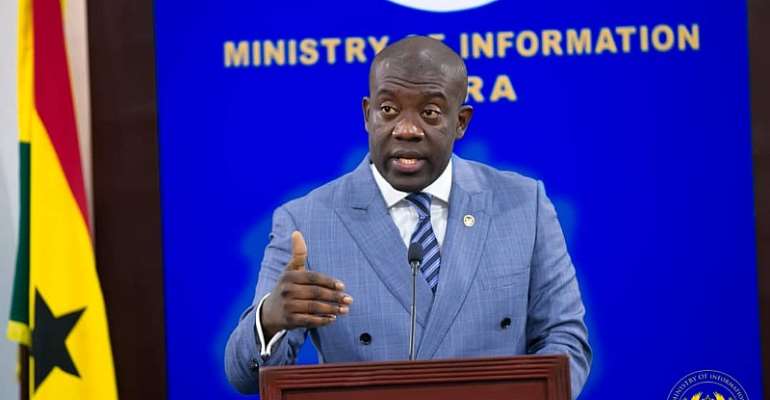 Minister of Information, Hon. Kojo Oppong Nkrumah has charged Ghanaians to exercise as investigation are underway regarding the suspension of the concession agreement between Government of Ghana and Public Distribution Services (PDS).

According to him, a full-scale inquiry investigation has commenced and is expected to be completed within 30 days.

Addressing the media at a press briefing, Hon Kojo Oppong Nkrumah said "A team comprising insurance investigation experts, officials of the Energy and Finance ministries and officials of the ECG and MIDA as well are expected determine the nature of the breaches and advise on suggested next steps. By Tuesday, the team is expected in DOHA-Qatar as part of the inquiry. All interested parties are cooperating with the inquiry at this stage."

This comes at the back of Government's decision to suspend its five years deal with PDS. It is emerging that issues relating to fraud has been discovered on the part of PDS forcing government to send a delegation to Doha, Qatar for further probe.

The Information Minister added that a second team has been tasked to continue engagement with the American government through its agency, the Millennium Challenge Corporation.

"This engagement is about the possible next steps after the inquiry and channels for sharing information as part of this inquiry. That team is expected to also be in the USA possibly next week as part of their engagement," he revealed.

Hon. Oppong Nkrumah fourth revealed that final efforts to ensure a smooth transition between ECG and PDS officials are proceeding without incident.

" We reiterate that this breach was discovered by the due diligence of the Ghanaian authorities through ECG and with the support of state agencies. For the avoidance of doubt, the provision of the payment guarantee has always been a condition precedent and was never changed to a condition subsequent as being speculated by some persons," he stressed.

Hon. Kojo Oppong Nkrumah emphasised that initial due diligence led by the transaction advisors did not detect any wrong adding that the second level checks led by the Ghana team initially yielded a response from Al-Koot confirming the guarantee.

"It was a third level check by the Ghana side that detected anomalies within Al-koot thereby triggering a fourth level check. The fourth level check involved sending an initial team from the Ghana Mission in Qatar to engage with Al-koot officials for further verification. This fourth level further proved the anomalies and suggested untoward action which is now the subject of the full scale inquiry," he intimated.

Responding to a question relating to whether the present brouhaha will affect Ghanaians, Minister of Energy, John Peter Amewu assured citizens his ministry is working hard to get to the bottom of this matter.

"Despite the ongoing PDS brouhaha, it will not affect power supply and the electricity bills of ordinary Ghanaians," he indicated.