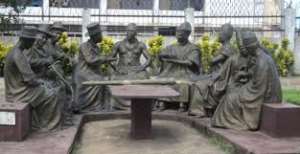 In my honest view, the ‘resolution’ by the National Assembly amount to gross misdemeanor and an affront on Section 11 subsection 4 of Nigeria’s 1999 Constitution; the Principles of the Rule of Law, the Doctrine of Separation of Powers and the National Assembly Standing Rules which forbids it from making sub-judice pronouncement on a matter pending before a Judicial interpretation. It will suffice to note that Justice M.G. Umar, of Federal High Court sitting in Benin City, Edo State, on July 2, 2019 ordered the National Working Committee of All Progressives Congress, APC; the Inspector General of Police (IGP); the Commissioner of Police in Edo State, Mallam Lanre Issa-Onilu, who are defendants in an ex-parte motion of the Plaintiffs/Applicant suit No FHC/B/OS/70/2019 filed on June 28, 2019, by Alhaji Yayaha Audu Omogbai, Clerk of the Edo State Assembly and the Edo State House of Assembly. Justice M.G. Umar restrained various parties from deliberating or interfering in any manner with the activities of the Edo State House of Assembly concerning the inauguration of the 7th Assembly and the election of the Speaker and Deputy Speaker which took place on 17th June, 2019. Also, in Suit No. FHC/PH/CS/159/2019, the National Assembly, the Clerk of National Assembly, the President of the Senate and Speaker of House of Representatives, amongst others, were specifically ordered by the Federal High Court to maintain the status quo as at 25th July, 2019. Furthermore, in suit No. FHC/ABJ/CS/815/2019, wherein the Clerk and the National Assembly are defendants before the Federal High Court in Abuja, the National Assembly and the Clerk have not only been duly served with the processes but have entered appearance in the matter.

The intrinsic values of the Doctrine of Separation of Powers in a Presidential System of Government make the three arms of Government co-equal and none is superior to other. The National Assembly’s ‘resolution’ amounts to coercing an elected governor, a head of an arm of government in a Federal Republic to comply with an unconstitutional ‘resolution’.

On the Issuance of a Fresh Proclamation Letter, the National Assembly erred. According to Section 105(3) of the Constitution of the Federal Republic of Nigeria, 1999 (as amended) inter alia “Subject to the provisions of this Constitution, the person elected as the Governor of a State shall have power to issue a Proclamation for the holding of the first session of the House of Assembly of the State concerned immediately after his being sworn in, or for its dissolution as provided in this section”. The role of Governor Godwin Obaseki of Edo State as envisaged in Section 105(3) of the Constitution of the Federal Republic of Nigeria, 1999 (as amended) was to issue a Letter of Proclamation, which he did on June 17th 2019 and his constitutional duty ended there in view of the subject matter. The Constitutional duty of the Clerk of the Edo State House of Assembly, Alhaji Yayaha Audu Omogbai commenced thereafter and he did the needful with the Letter of Proclamation issued to him by the Governor Godwin Obaseki which culminated to the inauguration of the 7th Edo State House of Assembly. The one already issued by Governor Godwin Obaseki on June 17th 2019 is still subsisting and valid till date. Therefore, the Governor cannot be ‘directed’ to issue another Letter of Proclamation so as not to set a dangerous precedent.

Provided that nothing in this session shall be construed as conferring on the National Assembly power to remove the Governor or the Deputy Governor of the State from office.” In addition, Section 11(5) states inter alia: “For the purposes of subsection (4) of this section, a House of Assembly shall not be deemed to be unable to perform its functions so long as the House of Assembly can hold a meeting and transact business.” Consequent upon the forgoing, it is imperative and constructive to categorically affirm that the state of affairs in the Edo State House of Assembly in comparison to what was envisaged by Section 11 subsection 4 & 5 of the 1999 Nigeria Constitution as amended is no applicable and completely different. The National Assembly ‘resolution’ cannot stand the test of any legal challenge for the proposed ‘take- over’ of the Legislative functions of the Edo State House of Assembly as it being ignorantly speculated.

Finally, a judicial interpretation of Justice M.G. Umar will not be a bad option if the Defendants/parties can maintain status quo pending the determination of the suit on the 9th of October, 2019.