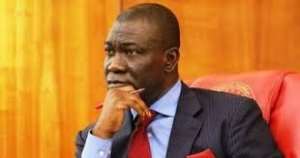 In respective of my ethnic-socio-cultural affiliations, I agree with the good people and Government of Nigeria in denouncing and condemning the inglorious and preposterous act perpetuated against a serving Senator and the immediate past Deputy Senate President of the Federal Republic of Nigeria, Senator Ike Ekweremadu, by members of the proscribed Indigenous People of Biafra (IPOB). The reprehensible episode happened at the Second Annual Iri-ji Cultural New Yam Traditional Festival, organized by Ndi-Igbo Germany in Nuremberg, on Saturday, 17th of August, 2019.

The Indigenous People of Biafra (IPOB) is the proscribed separatist movement that leads the calls for Biafrans freedom from Nigeria. Its main aim is to create an independent state for the people of old Eastern Region of Nigeria through referendum. They have issued calls for a peaceful settlement of their grievances through a referendum in the Nigerian states that were part of the old Eastern Region.

Distinguished Senator Ike Ekweremadu became the victim of a violent attack when members of IPOB stormed the venue of the event and began to question him about the killings of their kinsmen (the Igbos) when the Federal Government of Nigeria staged a military operation codename Operation Crocodile Smile and Python Dance in the South Eastern region of Nigeria. They also questioned him about his purported role in the proscription of IPOB in Nigeria. The situation soon degenerated to the extent that Chief Ekweremadu was physically dragged out of the venue, assaulted and pelted with eggs.

Chief (Dr.) Ike Ekweremadu is a veteran Nigerian politician in his own right; a seasoned legal luminary from Enugu State who has represented his constituents in the Nigerian Senate since May 2003, and is the immediate past Deputy President of the Nigerian Senate for three consecutive periods. In 2002, Chief Ekweremadu was appointed Secretary to the Enugu State Government, before then in 1997; he was the Executive Chairman of Aninri Local Government Area of Enugu State, He was also appointed the Chief of Staff of the Enugu State Government House. He was elected First Deputy Speaker of the ECOWAS Parliament and emerged the Speaker of the regional parliament in August 2011. On February 23, 2019, Chief Ekweremadu was re-elected as a Senator representing the Enugu West senatorial district For the Fifth Consecutive time.

The shameful and barbaric assault by IPOB members on Senator Ekweremadu is sacrilegious and despicable in all ramifications. He is any illustrious son whom IPOB ought to have celebrated and not vilified. Their action is a sharp contrast from the civilized cultural norms and values of Nigerians and a huge international embarrassment to the Government and good people of Nigeria in the comity of Nations.

Conversely, the choice of city of Nuremberg (also known as Nurnberg) in the German state of Bavaria by IPOB members to ventilate their superficial injustice against Senator Ekweremadu was either a calculated action or sheer twist of fate in historical perspective. The city of Nuremberg was selected between 1945 and 1949 as the location for the purpose of bringing Nazi war criminals who committed crimes against peace and humanity to justice. Additionally, Nuremberg city had been the site for trials because of its Palace of Justice which was relatively undamaged by the war and included a large prison area.

In view of the aforementioned, am not of the view that the political class of South-East extraction of Nigeria has committed genocide or war crimes to justify Senator Ike Ekweremadu’s Nuremberg assault. As I do not seek to defend IPOB unruly behaviour and neither do I support it. However, most Nigeria’s public office holders have committed heinous crimes against the peace and survival of the Nigerian people since independence in 1960. The transition to civilian rule in 1999, after a long chaotic era of military interregnum and failed democratic experiences, many Nigerians expressed optimism for the dividends of democracy that would expand Political liberties, improve the performance of government, encourage accountability among Political leaders, to revive the ailing economy. Unfortunately, fraudulent practices and corruption related crimes in Nigeria have been unabated. In fact, it has gone from bad to worse. Nigerians have not ceased to complain about disparity in income distribution and corruption in high places.

The incidence of corruption rose to alarming magnitude between the late 1990s till date. Greed is believed to have led to corruption. During these periods, corruption was nurtured and institutionalised by the political leadership. They wreaked havoc on the economy. It is illogical to compare the ill-gotten wealth of an average Nigerian Political office holder vis-a-vis the widespread acute poverty in the country. In Nigeria today, the economic inequalities and social gap in the material wellbeing of Political elites in government and the country’s larger populace creates conflict and breeds animosity between the ruling elites and the people. The display of opulence and the ostentatious lifestyle of Politicians in Nigeria, who loots the public treasury for their selfish interest at the detriment of the common people, are responsible for resentment and assault on political leaders. Nigerians are in pain and that pain has turned into a palpable and dangerous rage. The anticipated benefits of democracy have been slow to emerge, and the new dispensation has failed to fulfill the expectations of many Nigerians.

Political Corruption in Nigeria is a pervasive phenomenon. Nigeria is in a state of Paradox; Poverty in the midst of abundance. Despite Nigeria’s oil riches, 70 percent of Nigerians live below the poverty line, with corruption remaining a way of life. “Although the country is renowned for its oil and gas resources, extremely little of the revenue from this industry is re-circulated into the civil infrastructure such as hospitals, schools and roads. While Nigeria is the sixth largest producer of crude oil in the world, due to mismanagement of the economy, Nigerian people rank amongst the poorest in the world.” The bleeding of national resources translates into low productivity in the economy and unemployment for the people; and above all, it decreases investors’ confidence in the economy. The country’s Political leaders leave office with enduring legacies of a battered economy, Political instability, insecurity and penury which are indices of annihilation. If allowed to endure, the current situation in the country may result in a failed Hobbesian state of nature where life is nasty, brutish and short.

OSP not enough to win the fight against corruption — Micheal...
36 minutes ago