Still on Xenophobic Attacks on Nigerians in South Africa 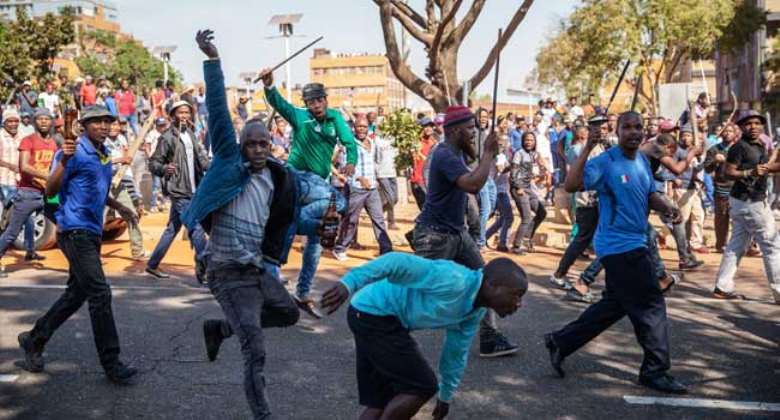 The recent xenophobic attacks on Nigerians and other Africans in South Africa are really worrisome. It threatened the exceptionally foundation of our brotherhood that has long existed among Africans within and outside of the Continent, which date back to the pre-colonial era till date. Most unfortunate, is the slow pace of response from the South African government to mitigate the outcome of the xenophobic attacks.

The attacks on foreign-owned shops began after South African lorry drivers started a nationwide strike to protest against the employment of foreign drivers. They blocked roads and torched foreign-driven vehicles mainly in the coastal KwaZulu-Natal province. It comes at a time some South Africans blame foreigners for taking their jobs. This heinous and barbaric act is condemnable. World leaders have also condemned it. The African Union (AU) issued a statement condemning the "despicable acts" of violence in South Africa "in the strongest terms".

Nigerian foreign policy has been characterized by a focus on Africa as a regional power and by attachment to several fundamental principles; African unity and independence, capability to exercise hegemonic influence in the region, peaceful settlement of disputes, non-alignment and non-intentional interference in the internal affairs of other nations and regional economic cooperation and development. It is heartbroken to note the level of South Africans abhorrence towards Nigerians. The peace and freedom enjoyed today in South Africa is as a result of both human and material resources contribution of Nigeria government and her people towards the liberation of apartheid South Africa. It's paradoxical and most unfortunate that, South Africa we helped liberated from the shackles of apartheid and suppression is now killing Nigerians and other Africans alike. What a shame!

Africa has been the centerpiece of Nigeria’s foreign policy since the independence in 1960. This engaged Africa's total liberation from colonial rule, racial discrimination, and apartheid system in terms of policy. Nigeria’s overall policy toward South Africa was derived strictly from its firm and total commitment to achieve accelerated decolonization and to uphold the dignity of the black race. This just obligation manifests itself in Nigeria’s persistent support for the oppressed black people in Southern Africa in general and South Africa in particular. Since its independence in 1960, Nigerian government and its people have demonstrated their concern over the violation of human rights and denigration of the black’s dignity by the minority white regimes in Southern Africa. The first practical demonstration of this was the sympathy generated by the Sharpeville massacre of March 1960. This eventually led to the vigorous pressures mounted by the Nigerian public on Balewa’s government to condemn, unequivocally the inhuman, racist, and despicable action of the apartheid South African regime. As a result, Nigeria was in the forefront in the clamor for intensification of embargoes, boycotts, and economic sanctions against apartheid South Africa.

Nigeria made enormous contributions towards the liberation apartheid South Africa. During the apartheid era in South Africa, Nigeria was one of the foremost supporters of Black South African liberation movements, including the African National Congress. The Nigerian government issued more than 300 Diplomatic Passports to South Africans seeking to travel abroad. A sizable numbers of South Africans studied in Nigerian universities, nursing schools, polytechnics and colleges of education on government sponsored scholarship. Nigeria hosted the African National Congress (ANC). Late President Nelson Mandela, on his release from prison, came on a courtesy visit to Nigeria and stated in Kaduna that Nigeria was the first country to make the highest donation to his liberation in the sixties. (Mandela’s Speech on 13th May 1990 in Murtala’s Square Kaduna)

The struggle took a more dramatic turn during the regime of Gens. Murtala/Obasanjo from 1975-1979. The struggle was so strong that domestic awareness was mounted to the degree that many tertiary institutions formed clubs like Youth Solidarity on South Africa. Apart from creating domestic and mobilizing public opinion, young Nigerians contributed from their little pocket monies to the struggle. It’s esoteric if not impossible to know the quantum of Nigeria’s financial commitment to the struggle against apartheid because apart from official commitment by government which was in different layers, individuals also committed resources into the struggle in diverse channels. Late Sonny Okosun of blessed memory, a Nigerian musician legend, wrote the hit song "Fire in Soweto" in 1977 to commemorate the 1976 Soweto uprising against white-rule in South Africa. How I wish the “Ozzidi king” was alive! Majek Fashek, a Nigerian musical icon also wrote a song, "Free Mandela" to pressure the apartheid regime to free Nelson Mandela. The Nigeria government sanctioned Multi-national companies in Nigeria that violated the economic/trade embargo on the racist South African regime, the local operations of Barclays Bank was nationalized after that bank ignored the strong protests by Nigeria urging it not to buy the South African government bond. Nigeria also nationalized the British Petroleum (BP) for supplying oil to South Africa. And In 1982, the Alhaji Shehu Shagari government urged the visiting Pontiff Pope John Paul II to grant audience to the leaders of Southern Africa guerrilla organisations, Oliver Tambo.

In international relations and diplomacy, deterrence and retaliatory diplomacy are veritable tools available to countries in the comity of Nations to achieved their goals and earn respects and prestige from other member Nations.

The South African government should be aware of her huge investment in Nigeria and the need to protect Nigerians business in South Africa. South African Airways enjoys monopoly of the Lagos-Johannesburg route as one of its lucrative route; Multi-Choice (DSTV) pay-tv makes its life-line in Nigeria's over 120 million subscribers' network base. Nigeria is MTN's biggest market, with 58 million users in 2018, and accounts for a third of the South African group's core profit. Stanbic-IBTC, Africa's largest bank has its footing in the mainstream Nigeria financial systems to mention a few.

Nigeria government needs to critically review her foreign policy to be in tandem with present day reality and also to forestall a recurrence of this ugly situation from other Nations. Victims of the xenophobic attacks should be adequately compensated by the South African government, with an assurance that should attacks will not reoccur.

My loyalty towards NPP remained intact despite being sidelin...
18 minutes ago