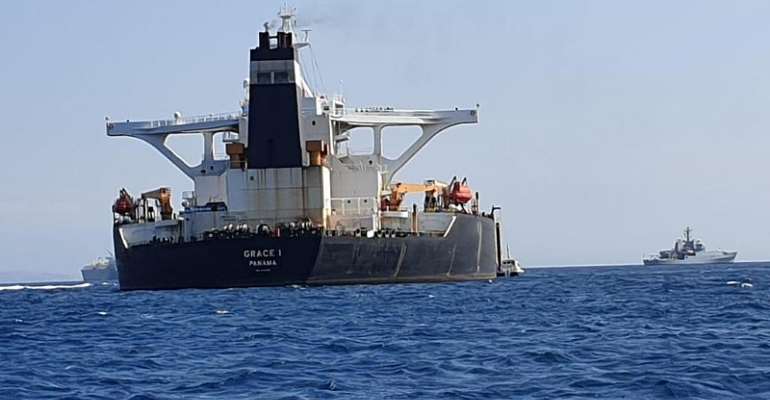 Gibraltar's Supreme Court has issued a 14-day extension to the detention of  supertanker Grace 1, which is suspected of breaching EU sanctions by shipping Iranian light crude oil to Syria. But the Grace 1 is not the only Iranian tanker in trouble.

Gibraltar's Attorney General Michael Llamas, QC, said that that the court has granted an extension to July 19 under Gibraltar's sanctions legislation.

The vessel's 28-man crew are mostly of Indian nationality but also include Pakistani and Ukranian nationals.

They are being interviewed as witnesses, according to the Gibraltar Government.

A detachment of British Royal Marines from 42 Commando boarded the vessel on Thursday in a joint operation with the RGP and other Gibraltar law enforcement agencies.

The marines took over the ship after it entered British waters off Gibraltar Thursday to pick up food supplies and seized it over accusations it was breaking sanctions by taking oil to Syria.

The Grace 1, a 330 meter crude oil tanker, built in South Korea and registered in Panama and was built in 1997.

According to vessel tracking website Baltic Shipping, the Grace 1 is owned by Russia Titan Shipping Lines,  a subsidiary of Dubai-based oil and energy shipping company TNC Gulf, which has ties to Iran.

Automatic Identification System
According to Lloyds, the tanker “used the same strategies and tactics previously used by tankers shipping Iranian crude to China and Syria.”

It had its Automatic Identifcation System turned on and off to avoid detection of its location, cargo origin and destination.

On Friday, Iran demanded that Britain immediately release the tanker, accusing it of acting at the bidding of the United States.

A senior foreign ministry official "described the UK move as unacceptable" in a meeting with British ambassador Rob Macaire, who had been summoned to hear a formal protest, the ministry said in a statement.

The secretary of Iran's Expediency Council, a key advisory and arbitration body, warned that if Britain failed to release the tanker Iran would be forced to take tit-for-tat action against a British vessel.

The Iranian Mehr News Agency quoted Iranian member of parliament Mohammad Hossein Farhangi as urging international bodies to speak up and “stand in the way of banditry of the US and the UK.”

The detention of the Grace 1 comes at a sensitive time in Iran-EU ties as the bloc mulls how to respond to Tehran announcing it is poised to breach the uranium enrichment limit it agreed to in a troubled 2015 nuclear deal.

Happiness
Meanwhile,  another Iran-linked oil tanker is in trouble as it is kept by Tehran arch rival Saudi Arabia.

Saudi coast guard rescued the Iranian tanker “Happiness” on April 30 after it run into mechanical trouble, and towed it to Jeddah, where it, and its 26-strong crew, remained since.

The National Iranian Tanker Company is charged an addiditional 200.000 USD per day for “maintainance reasons.”

Forbes reported that Iran claims the ship is sea worthy and can go home, accusing Saudi Arabia of “ransom-seeking and hostage taking.”