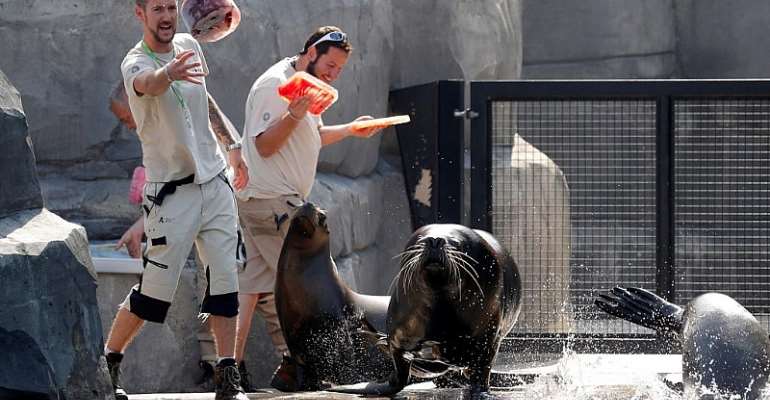 France's heatwave has risen to the highest echelons of political power. French prime minister Edouard Philippe visited the health ministry on Friday and reiterated the government's appeal to all to take precautions to prevent overheating bodies.

The south and south-east of France are bracing for their highest all-time temperatures at 45°C from Marseille to Montpellier, and the hinterlands.

In Paris and most of the rest of the country, the temperatures rose to the low to mid-30°s, normal for July or August, but extermely rare in June.

A few spots on the Channel or Atlantic coasts were breathing easy in the 20°s.

National weather forecaster, Météo-France has placed the region on red alert for the first time in recorded weather-history in the country.

Government alert
Prime Minister Edouard Philippe said,"we are acutely aware that the current situation should neither be dramatised nor downplayed, but taken seriously. Because there are risks for everyone."

"Measures have been taken to ensure care for the most vulnerable people. This heatwave is so intense, everyone here must be extra careful, not only for themselves but also for their families, friends and neighbours. It's essential."

Health Minister Agnès Buzyn, speaking at a public hospital in Nîmes said "we are better prepared than in 2003."

The government is taking the situation very seriously. 15,000 deaths were attributed to a similar heatwave in the summer of 2003 in France.

The dangers of the European heatwave

The heat blowing up from the Sahara desert has caused two deaths in Spain. A 17-year-old farm worker cooled off after work in a pool and collapsed with convulsions near Cordoba where he died in hospital. A 93-year-old man collapsed and died on the street in the northern city of Valladolid. Police said heatstroke was the cause of death.

Here in France Health Minister Buzyn warned that cooling off in water should be only done in designated public bathing areas. She noted that that four people had drowned since the beginning of the week.

Heat-related deaths have also been reported in Italy, France and Germany, mainly among the elderly.

Hydrant warning
On Thursday, a six-year-old Syrian child was seriously injured after being catapulted into the air by water gushing from an open fire hydrant and then crashing to the ground.

This week's incident occurred in the town of Saint-Denis north of Paris, where "uncapping" hydrants is often used as a way to cool off.

The water that spurts out of the hydrants in powerful jets is meant to channelled through firefighters hosed to put out blazes.