The Terrible State Of Accra To Koforidua Road 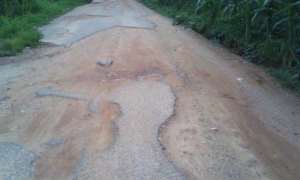 I have a great desire to write about this troubling issue which has been ensuing in this country by bringing on board the problems encountered when using the Accra to Koforidua stretch of road, as a case study to present to the general public about the ‘horrific’ nature of our roads and how government respond to them but before I proceed to the main discussion, I have to take this great opportunity to thank all those who spent their time and resources to nominate and also voted for me in the 2019 University of Ghana Excellence Awards. Even though we did not win any of the three categories, I was amazed at the support with which you gave me. As a matter of fact, I was the only person who got nominated, evaluated and shortlisted for three different categories; Journalist of the year, Student Voice of the year and Creative Fellow. It was indeed a wonderful experience and I appreciate all your efforts. At a point in time I felt I did not deserve the love and popularity you gave me. Now back to the main topic of which I have chosen to write about.

In 2016, I had the opportunity as a noble citizen to fulfill my civic responsibility by partaking in the 2016 general election which saw then incumbent president, John Dramani Mahama lost to his rival now president of Ghana, Nana Addo Dankwa Akufo-Addo. Fast forward in 2016, when the opportunity came for people to transfer their votes to the nearest area where they could vote, I did not move my records from my area to the place that I resided (University of Ghana). During the 2016 general election I was an undergraduate student at the University of Ghana and for the sake of convenience I was supposed to move my records to campus to avoid all form of unnecessary spending. I come from Oyoko-Koforidua in the eastern region and anytime I go to Koforidua I use the beautiful mountainous road. I enjoy this road because of the nature of the road and how it is being constructed. It is a wonderful mountainous journey which everyone enjoys.

I travelled to Koforidua on December 6, 2016 and as usual I used my favorite road, the Accra to Koforidua road. I have always known that some sections of the road were in terrible condition and I have always prayed that government will attend to these bad situations. Interestingly, the government did respond to these devastating situations some few days to the 2016 general election. The road was being constructed overnight as Constructors worked day and night to make sure they fix the road before the election took place. Upon reaching the places where these constructions took place, I realized that the government was desperate to retain power and was doing everything within his might to retain his administration.

Surprisingly, a road that was constructed less than three years ago is now in a terrible situation. I had the opportunity to travel to Koforidua about a week ago on 7th June 2019 to attend a Stake Conference at The Church of Jesus Christ of Latter-Day Saints in Koforidua. As usual, one will always enjoy that road which leads to Koforidua because of its precipitous nature. How the car will descend and ascend in a twinkling of a second will just amaze you. The curves, the nicely constructed road from Ayi Mensah down to Aburi is fascinating.

Some of the areas that these constructions took place were Nsuo Beto an area in Tinkon, Adooso, Mampong Nkwanta, Mokom and Kwamoso. These areas received beautiful construction on their roads in 2016. Are these roads still beautiful as they were? You need to witness them before you can understand the issue proper. The potholes or ‘manholes’ as some people call it which have taken over this stretch of road is what baffles me. The condition propels drivers to swerve the potholes which sometimes is dangerous because such manner can cause accident and over the years this manner has caused numerous accidents. A road which was constructed in late 2016 has deteriorated in less than three years. Coming back from Koforidua, I personally engaged the driver and made some enquiries about the nature of the road. He told me that the road got spoilt somewhere 2018.

Now, the issue is the same everywhere that this form of construction took place prior to the 2016 general election. Over the years this is how various incumbent governments have been doing; they wait until election period before they construct these deplorable roads and they do so to win votes from the electorates. Contracts are given to road constructors in a very haste manner and these constructors are being pressured to finish the work in a very short period and because of that, shoddy works are being done. As I stated earlier, this issue is just a microcosm of the terrible roads we have in this country which are being constructed in a rush form during election periods. If everyone is reporting same situation as this article is, then we would really know the terrific condition of our roads!

My experience on that road drew my attention to the numerous road accidents that we have been recording on our roads. We have a big problem in this country, and we need to demand for fairness and accountability from these leaders. How will a serious government wait until election period before they do developmental projects like building of schools, hospitals and roads? Citizens are being joked by these people and the earlier we speak the better for us. I write this piece to add my voice to the many voices that have been raised to create awareness for government and leaders to be responsible.

Most of the time, we blame drivers for their careless driving for causing accident on our roads, I do not deny this fact because most of the careless driving lead to a lot of road accident, but I personally also think that the nature of our roads also contribute tremendously to the incessant road accidents the country record each year. If you have people who are greedy and always think about themselves and their political parties at the blank side of the country, how are we going to develop as a people? We use the resources of the state to invest in our own businesses and hoard some of them and try to play on the vulnerability of citizens by constructing some ‘9-day wonder’ roads. Such a pathetic situation!

It looks as if citizens also tolerate this form of lackadaisical and look-warm attitude of politicians. Besides what we have seen, it is most probable that the same thing would be repeated in the coming election and the subsequent elections which are going to be held. Yet, citizens will vote for these people. Government will take advantage of the people and do a ‘9-day wonder’ project by constructing these night roads which deteriorate whenever it rains. I am looking forward to a day that citizens will revolt against these greedy people in authority and say enough is enough. We need to demand for the right things to be done.

Moving further, government should respect citizens and do things that will benefit everyone. I think of it as being difficult and unlikely for governments in advanced countries to engage the citizens in such deceptive acts. If Dr Kwame Nkrumah had done these ramshackle kinds of work where would have been Ghana by now? I know this road will never be constructed again until another election period. I am very sure that this government will do everything possible to repeat the same mistakes committed by his predecessors. If we continue to follow this tangent, then this country would have no future whenever we talk about development. This look-warm attitude will never happen in any developed country, where a project is done and within three years we go back and redo it. Why don’t we attach excellence to the works we do? Elsewhere in Europe and America, they have some roads which have been in existence for more than a century and they are still in good shapes. It is about time that citizens vote out such incompetent leaders anytime they are being bribed with such ‘419’ projects. Ghanaians deserve better and is about time leaders gave them such treatment they rightfully should enjoy as loyal citizens of the country.

"All Trained Teachers From Colleges Of Education Were Duly E...
13 minutes ago