Ghana Has Initiatives To Tackle Upsurge In Non-Communicable Diseases 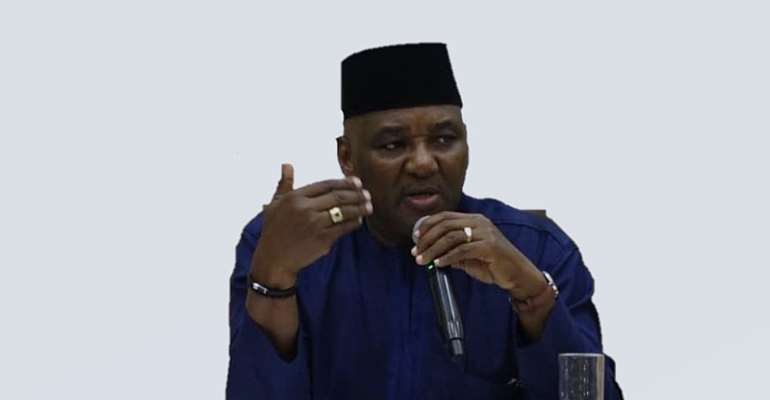 The Director of Policy Planning Monitoring and Evaluation Division (PPMED) of the Ghana Health Service, Dr. Koku Awoonor has stated that Ghana’s poor response to the growing threat of non-communicable diseases does not stem from a lack of policy to address the problem.

In Ghana, non-communicable diseases are said to be on the rise with data showing that major risk factors of most NCDs such as poor life style, urbanization and aging are all on the ascendency.

“Given these unhealthy statistics, it is not surprising that about 25% of adult Ghanaian are estimated to have hypertension and 3.4% have diabetes with the general burden of NCDs estimated to account for up to about 43% of all deaths in Ghana” Dr. Awoonor stressed.

The disturbing statistics has prompted calls for a national action plan to halt and possibly reverse the trends.

Although public discourse on the subject is far from a consensus on the appropriate national response to deal with the situation, many have sought to blame the country’s slow response to what has been described by some experts as a “crisis” on the lack of an appropriate policy or a determination to re-design the current health care system or both if we were to make any meaningful progress towards rolling back the NCD menace.

Contrary to these views however, Dr. Awoonor believes Ghana has several policy initiatives, strategies and documents on both communicable and non-communicable diseases and does not need a new policy, neither do we necessarily need to re-design the current health system as core measures to enable us adequately tackle the onslaught of NCDs in the country. Instead, there is an urgent need for a national commitment to effectively implement the existing policies.

In this regard, Dr. Awoonor argued that if the Ministry of Health and its agencies could identify and align their respective mandates with the existing NCDs related policies, every aspect of the problem could be taken care of adequately.

Dr. Awoonor made the observations while addressing participants at a public lecture series organized as part of activities to mark the 60th Anniversary of the Ghana Academy of Arts and Sciences.

The three-day public forum was on the general theme: “Non-Communicable Diseases”. The main theme featured several sub-themes intended to explore various aspects of the problem.

Speaking on the topic “Redesigning HealthCare Systems” under the sub-theme “Social and Institutional Responses” Dr. Awoonor said Ghana resolved to build the country health care system on the principles of primary health care with a focus on disease prevention and health promotion with the community as a principal stakeholder as far back as the 1970s.

Dr. Awoonor referred to a 1977 Ministry of Health policy document which asserts that “Most of the diseases that cause illness and deaths in Ghana are preventable and curable if diagnosed properly by simple basic primary health care procedures. The major objectives of the ministry are therefore to extend the coverage of basic health services and primary health services to most people possible. In order to provide this extend of coverage, it will be necessary to engage the cooperation and authorization of the people themselves at the community level. It will also involve the curtailment of sophisticated hospital construction and renovation and will require re-orientation and re-redeployment of the health staff from hospital-based activity to community-oriented activity” Ministry of Health, Ghana (1977).

He said as a country, Ghana has recognized the growing threat of NCDs in the past two decades and at various points in time made conscious efforts to initiate policies with the main objective of providing national response to the problem. For example in 1992 there was the Non-Communicable Disease Control and Prevention Program.

This was followed in 1996 by the Regenerative Health and Nutrition Program. He said in 2011 the National Strategy for Cancer Control was developed. 2012 also saw the development of the National Policy for the Control of Chronic Non-Communicable Diseases and in 2017 alone two policy initiative on NCDs, the Smoking Cessation Clinical Guidelines and National Alcohol Policy were delivered.

He said the national vision to come out with a primary health strategy inspired health research by the Ministry of Health and its partners which culminated in the development and subsequent adoption of the Community-based Health Planning and Services (CHPS) program. As a home-grown strategy today, CHPS has become Ghana’s flagship primary health care strategy for achieving Universal Health Coverage.

Dr. Awoonor who is well known for his pioneering role in leading Nkwanta District in the Oti Region formerly under Volta Region to successfully replicate the CHPS concept outside of Navrongo where it was first developed from a research experiment at the Navrongo Health Research Center noted that the CHPS program is a wellness strategy that emphasizes prevention, health promotion, health education, referrals and management of minor ailments and is accessible by about 60% of the population unlike hospitals and other urban-based sophisticated facilities.

He pointed out that since non-communicable diseases are lifestyle based; they can best be tackled significantly through primary care approaches such as preventive, health promotion, education, referral and other approaches which already form the foundation of the CHPS program in Ghana.

He was quick to add however that the only major gap in the implementation of CHPS which has made it less adequate for addressing the NCD threat is the program’s over-concentration on maternal and child health. Therefore, to embrace NCDs effectively, CHPS facilities would need to be well resourced; all CHPS compounds should be provided a minimum package of essential medicines and logistics.

In his view, the CHPS program will also require a bold and comprehensive financing mechanism under the National Health Insurance Scheme if it were to support NCDs sufficiently.

This he revealed could be done through modifications that will see the NHIS being used to drive preventive health strategies instead of the current arrangement where it focuses more on treatment and favors hospitals to the extent that medicines and treatment procedures carried out at hospitals and other urban-based facilities attract higher fees while CHPS facilities are not only receiving lower rates for managing same disease conditions but are also highly restricted in the type of services they could provide and a bigger chunk of the services they render are unfunded.

Dr. Awoonor was optimistic that integrating NCDs into our primary health care agenda will help to accelerate Ghana’s progress towards the achievement of Universal Health Coverage.

Dr. Awoonor commended the Ghana Academy of Arts and Sciences (GASS) for the forum and choosing the important area of NCDs.

He said with the support of GASS and other stakeholders, the agenda for tackling NCDs in Ghana can be reached.

He maintained that for Ghana to make progress we must work towards achieving the global health agenda by reducing premature deaths from NCDs by 1/3 by 2030.