Hundreds arrested in Moscow protest against police impunity and corruption 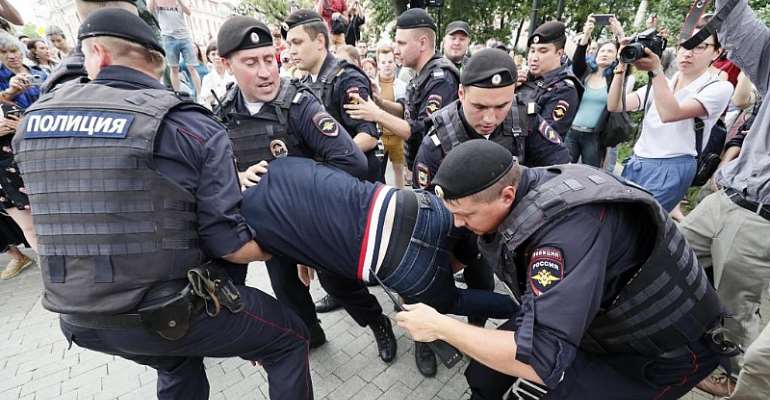 More than 400 people including opposition leader Alexei Navalny have been detained in Moscow during an unsanctioned march through the city centre to protest against corruption in law enforcement agencies.

Russian police in riot gear moved in against the unsanctioned march of more 1,000 people amid screams of protesters shouting "you are criminals" and "stop police terror."

Moscow police said around 1,200 took part in the march and more than 200 people were arrested.

As police dragged protesters into vans the crowd yelled: "Shame, on Russia Day, this is our country's day! Have you forgotten the constitution?"

Some of the arrested wore T-shirts in support of Ivan Golunov, an investigative journalist who was last week arrested on trumped-up drugs charges.

One detained activist brandished a placard saying, "I am Ivan Golunov" in the window of a police van.

At least four journalists were detained including a producer for Der Spiegel, a German news magazine.

"The authorities are very much scared of the fantastic and unanimous display of solidarity in the Golunov case," Navalny tweeted.

"So it's important for them to destroy common solidarity and then intimidate and put in prison those who insist (on reforms)."

Wednesday's march was initially called to press for the release of Golunov who was then suddenly freed, with the charges against him dropped, on the eve of the rally following several days of public outrage.

Many saw Golunov's release as a Kremlin attempt to crush the new protest wave.

Protesters called for reform of Russia's tainted law enforcement agencies and the release from prison of victims of police abuse.

Some urged the release of political prisoners including Ukrainian filmmaker Oleg Sentsov.

On the eve of the march the Kremlin said the protest could interfere with Russia Day festivities.