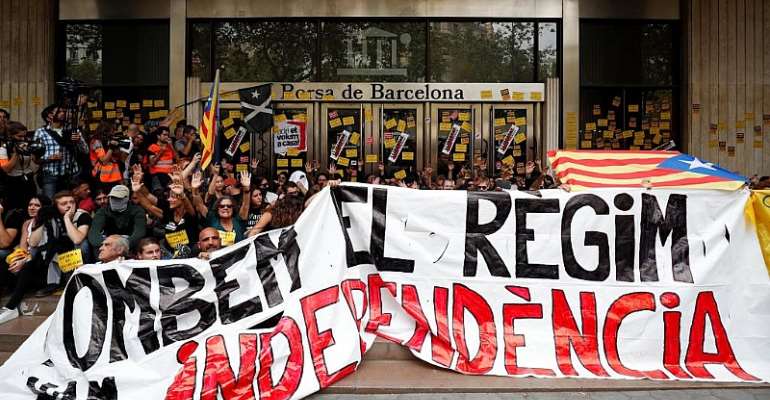 The trial of 12 Catalan separatist leaders over their role in the region's 2017 independence bid is due to wrap up this week after four months of hearings. The twelve stand accused of “rebellion” and inciting violence.

“Nothing has been proved. There is no evidence for rebellion or sedition. The key point of the prosecutor is the use of violence.

“The only violence was provided by the police forces that attacked and beat peaceful voters. The resistance was non-violent."

According to Piqué, the atmosphere in Barcelona, where many watch the trial in Madrid via the 24 hours news channel, is “quiet,” adding that Catalans are following the event with “contained indignation”.

“No one in Catalonia believes that these charges will be sustained. Even people who are not in favor of Catalan independence say that this is a major injustice,” he adds.

Declaration of independence
The suspects include nine former ministers in Catalonia's regional government, including former Catalan vice-president Oriol Junqueras, as well as the ex-speaker of Catalonia's parliament, Carme Forcadell.

They are accused of breaking the law by helping organise a referendum despite a court ban. The twelve made a short-lived declaration of independence in October 2017, sparking Spain's worst political crisis in decades.

Public prosecutors argue they carried out a "perfectly planned strategy... to break the constitutional order and obtain the independence of Catalonia" illegally.

“What happened on the first of October (the day that the referendum took place) is there for everybody to see,” says Piqué，rejecting Madrid's accusations as “completely baseless”.

“A referendum was called. If the Spanish government thought it was invalid, they should have ignored it. Instead they tried to disrupt it.

“Because they well knew that value to referendums is given by turnout, and since they were expecting a sufficient turnout they sent in the police force."

The defendants deny the secession bid involved any violence from their side. They point out that police used batons and rubber bullets on would-be voters on the referendum day, as a result of which Human Rights Watch accused Spanish police of using “excessive force”.

Enrique Gimbernat, a criminal law professor at Madrid's Complutense University, told AFP that rebellion has been "proven" since the accused told people to go vote in the referendum knowing violence was inevitable.

But Argelia Queralt, a constitutional law professor at the University of Barcelona, argues prosecutors misinterpreted the criminal code.

While there were "acts against the constitution" and "some one-off" violent incidents during the referendum, there was no "clear violence" that could justify a rebellion charge, she adds.

Heavy jail terms
During the trial, experts from Spain's finance ministry estimated that at least 917,000 euros in public money was used, mainly to finance a publicity campaign for the referendum.

Prosecutors have called for jail terms of seven to 25 years in the case of Junqueras, who is the main defendant.

Seven other politicians involved in the independence push -- including former Catalan president Carles Puigdemont -- are in self-imposed exile abroad.

The central government's attorneys have asked for lower sentences of up to a maximum of 12 years in the case of Junqueras.